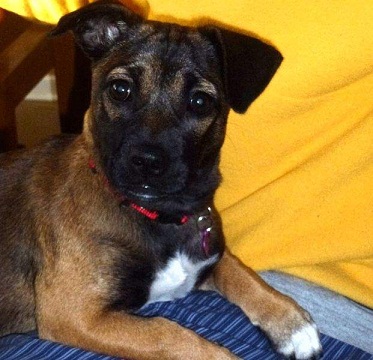 An Ontario family needs help finding their dog who went missing at the US-Canadian border in Detroit.  The nine-month-old Jack Russell-pug mix, named Ash, went missing on Friday, and has not been seen since.

The Wilcken family of Waterloo, Ontario, was on their way to Atlanta for Christmas and crossed the Ambassador Bridge in Detroit.  They entered the US Customs inspection area, and officers caged the pup.  But Ash pulled out of her collar and took off when they opened the cage to inspect her.  Officers apologized and searched for her on foot and in cars, but to no avail.

The Michigan Humane Society and US Customs supervisors are on the lookout for Ash.  Detroit’s animal control shelter has also been notified, and has two fliers posted on their bulletin board.  If she is found and brought to any shelter, it will likely be this one, as it is a stone’s throw from the bridge.  No animals (except seriously injured ones) will be euthanized at the shelter until January 7th, and employees know to look for Ash, so there is no chance she will be accidentally put down.

“Right now, we’re on shut-down except for feeding and caring for about 200 dogs, cats, possums and raccoons being held at the facility,” animal control officer Lapez Moore said.

The family continued on their planned trip, but not before leaving their information and a photo of Ash.   They have been anxiously waiting in Atlanta for news on their missing puppy.  They will be returning to and spending the night in Detroit on January 3rd before heading home, hopefully with Ash in tow.

Nine-year-old Joseph especially misses his dog.   Mother Ana was consoled by the fact that so many in the Michigan area were sharing her family’s story in an effort to locate little Ash.

“Every day, our son says something about that dog.  I remind him of the nice moments we had with her… we have two presents on the tree for Ash – plastic chew toys,” she said.  “It’s really nice to know that people feel our sadness.”