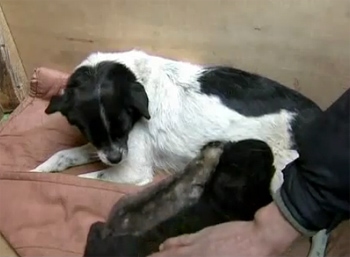 A dog in a Chinese Zoo has adopted very two unusual pups. A two day old panther cub and newborn wolf pup born at the zoo both needed care after their mothers were unable to produce milk. Another zoo resident – a dog who had just given birth to a litter of her own puppies – stepped in and took on the task of mothering both of the unlikely adoptees.

Zoo officials say the dog continued to feed the offspring until they were one month old before they were switched to a diet of cow’s milk, then transitioned to an adult diet.