In Motul, Yucatan, Mexico, a dog joined Catholic parishioners during mass and throughout the town’s procession celebrating the Virgin.

For believers, “La Virgen del Carmen” is celebrated with a large festival that takes place during July 15 – 17. Daily masses take place and on the last day, a large celebration with traditional folkloric dances, prayers, and a procession is held.

Well, this year, a white and tan four-legged believer joined the festivities when its owners attended mass. However, the dog got separated from his owners in the crowd, yet somehow managed to get front row seats at church and then walked along parishioners during the procession. 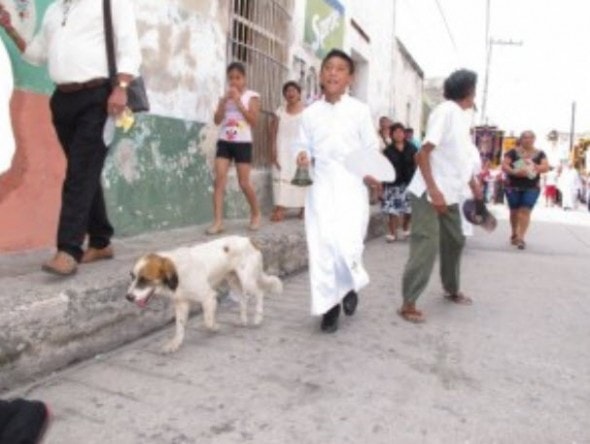 Many thought he was a homeless dog that entered the church looking for food and a place to rest. Father Luis Ángel Espínola Echeverría, from St. John the Baptist Church, joked during mass services saying that even the town’s dogs were Catholic believers.

All in all, the dog was welcomed to celebrate the festival along the other two-legged parishioners and at the end was reunited with his rightful owners.