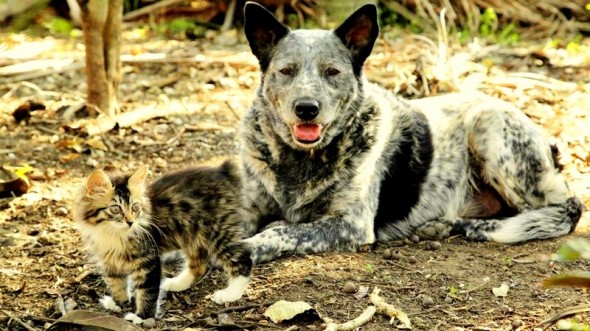 Ralphee the kitten has a neurological disorder called cerebellar hypoplasia, causing her to wobble like a drunken sailor.  Max the cattle dog has a fierce protective instinct.  When the two were introduced, their friendship was kismet.

Ralphee the kitten and Max the cattle dog are an odd couple who seem besotted with each other’s company after they were introduced following Ralphee’s rescue from a barn at a horse stable.

Ralphee’s condition is a neurological disorder known as feline cerebellar hypoplasia. A kitten is born with “CH” when their cerebellum, the part of the brain that controls fine motor skills and coordination, is underdeveloped at birth.

These cats are known for their “drunken sailor” walk, which is why they’re known endearingly as “wobbly cats.”

Unless a CH cat has other health issues, their life expectancy is the same as a cat’s without CH. Since the condition is non-progressive, it will never get worse — and in some cases, owners say that their cats become more capable over time.

Ever since Ralphee was brought home, Max is never far away. He appears to be forever curious and watches over Ralphee wherever she goes. Ralphee is growing more mischievous by the day and loves to see what Max is doing as well. She will often get excited when he is nearby and leap in the air before playfully charging in his direction.

Despite her condition, Ralphee is a happy cat who, like most kittens loves affection and causing all sorts of trouble wherever she goes.

Wakaleo says they may post another video of the two when Ralphee is a little bigger.