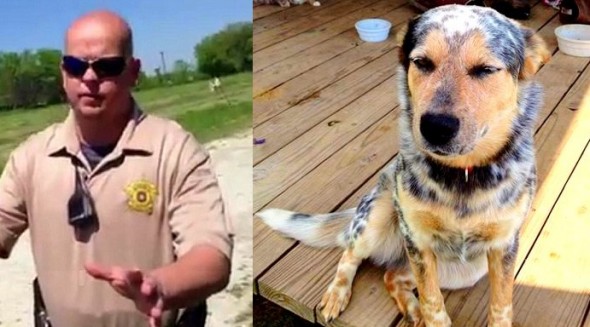 Jerrod Dooley, the sheriff’s deputy who was fired after shooting Cole Middleton’s dog Candy, is crying the blues now that he has been indicted on the charge of animal cruelty.  He is facing up to two years in prison – a revolutionary step towards justice for the many sweet dogs killed by police.

By now you’re probably familiar with Candy’s story, but if you’re not, here’s a recap:

Cole Middleton came home one day in April to find that his Texas farm had been robbed.  He called the sheriff’s department, and during the two hour wait for a deputy to arrive, he went to work on the tractor with his dad.  Blue heeler Candy was asleep in the tailgate of Middleton’s truck.

Deputy Jerrod Dooley arrived, and seeing him pull up, Middleton honked the tractor horn to let him know he saw him and was coming to meet him.  Candy, doing her job of protecting her property from the stranger, barked at Dooley and jumped down from the truck.  Only Dooley knows exactly what happened next, as it unfortunately was not captured on his dash cam.

He claims that Candy charged at him and he fired two rounds.  Middleton rushed over and watched in agony as his beloved work partner and family member thrashed on the ground and yelped out in pain.  He begged Dooley to end her suffering, but the bumbling man refused.  He got back in his vehicle, what he should have done in the first place, and waited for backup.

Middleton was forced to kill his own dog by drowning.  He had her body examined by a vet, who determined that Candy was shot in the back of the head, and was clearly retreating from Dooley when he fired.

Dooley was fired from the department, but they claimed it was because he was receiving so many threats.  Now he’s pulling out the sob story in interviews, claiming that he had to shoot Candy because “she wouldn’t get back.”

Few believe him, and now he faces scorn wherever he goes.

“I can’t go to the grocery store without being recognized, pointed at, laughed at,” he whined.  “Can’t pay my water bill without hearing my name, saying ‘There’s the sorry cop that killed the dog.’”

A grand jury saw through his crocodile tears, too, and indicted him on a charge of animal cruelty, punishable by up to two years in prison.

To continue receiving updates on Candy’s story, become a fan of her Facebook page.