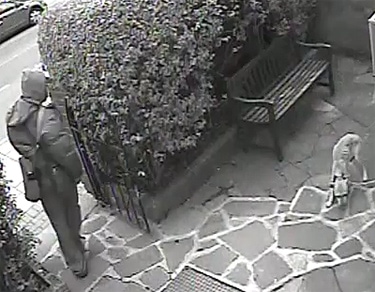 Shocking CCTV images which show a dog being dumped at Britain’s Wood Green Animal Shelters has been released by the charity in a bid to highlight the increasing number of animals being abandoned.

Honey, a four-year-old Staffordshire Bull Terrier cross was taken to the London Shelter in Lordship Lane by her former owner, tied up to a drain pipe and abandoned on the morning of January 27. Distressing CCTV footage shows the man walk through the gate to the Shelter; tie the dog up before walking away, briefly glancing back at the dog. Honey is then seen attempting to follow the man and spinning and pulling trying to get away, until a member of staff arriving for work discovers her and takes her inside.

When Shelter staff untied her they were shocked to discover Honey emaciated, shivering and terrified.

Honey, as named by staff at the Shelter, was taken inside and assessed. At just 10kgs she was almost half her ideal weight and had extremely painful sores on her back legs, suggesting she was kept outside. Honey was transferred to the Godmanchester Shelter where she was given a warm kennel and some comfy blankets to lay on. She has been put on a special diet which will see her consume four to five meals a day to help her reach an ideal weight of approximately 17kgs.

Manager of the London Shelter, Katie Wickins said: “It is disappointing that this individual not only dumped this dog on our doorstep without providing us with a full history which proves invaluable to the Charity when it comes to assessing the dog for rehoming, but more importantly, that this dog was allowed to get in such an horrific state. Honey’s extreme weight loss and pressure sores have not developed over night. It is unacceptable for anyone to allow their pet to suffer in this way. She is a very sweet but also very nervous dog and was clearly very distressed by being left outside. When the man who tied her up left, Honey tried to follow him, when she realised she couldn’t go anywhere she became very distressed and was pulling and spinning trying to get away.”

In January the Charity took in 354 animals including dogs, cats, rabbits and chickens, of which 15.5% (55) were strays.