No, Chacho is not actually invisible, but in the eyes of all those who walk through CIAAM (Centro Integral de Animales Abandonados de Madrid) he is. The shelter’s staff and volunteers have classified him as an “invisible” dog because he is a large breed, an adult, and a mixed breed. Characteristics of dogs hardly anyone want to adopt. 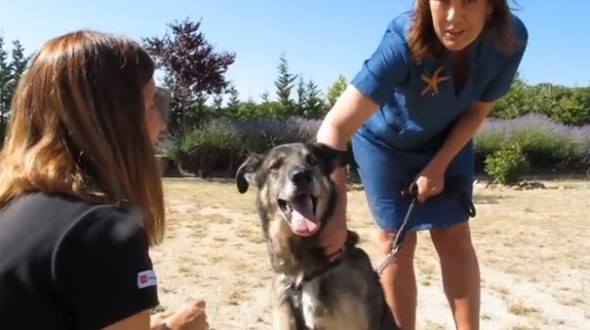 This lovely canine in search of a home is eight years old, but has lived six years at the center.

According to shelter volunteers, the homeless dog is very attentive. He always waits for someone to pet him or play with him, and he greets everyone with a happy tail wag. So why is he still at the shelter? Well, like many of other adult, large breed dogs here in the United States, Chacho is just getting passed over for fluffy, young, pocket size dogs.

A video campaign to get Chacho adopted was launched on July 8th, and even though many news channels have picked up his video and have covered his story, he is still at the shelter waiting for his forever home.

Here is hoping Chacho along all other “invisible” dogs in shelters get the loving homes they deserve.

3 thoughts on “Chacho the Invisible Dog Wants a Home”