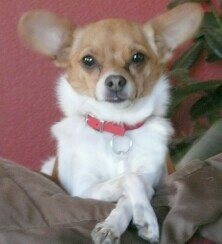 Peggy, a Chihuahua nicknamed “Peggy Leg” because she was born missing one of her back paws, is getting her Christmas wish fulfilled. She will be the smallest animal in the United States to receive a prosthesis according to researchers.

North Carolina State University has officially accepted Peggy into their prestigious veterinary research program. Researchers are working on a prosthesis for Peggy that will be about the size of a human finger. The prosthesis will help Peggy and also has potential to help humans in the future. “Into the future this can transfer into human beings getting really sensitive feelings in their fingers, which of course will help our veterans,” said Mary Jewell of Enchantment Chihuahua rescue.

Peggy will be getting a full bionic paw that will have electrodes connected to her nerves. This will give her full motion to run and scratch. Molds of Peggy’s leg have already been sent overseas where the bionic paw is being made. Although she might not have her new paw by Christmas day, her new paw is expected to arrive soon after. She will then receive surgery to attach her new paw, the cost of which is covered by the NC State research program.