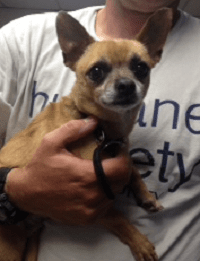 Rover, a 3 year old Chihuahua, has recently had a dramatic change in his life circumstances. Rover’s luck had practically run out when he was found as a stray in one of the local shelters. He had injured his foot and it appeared he would need an amputation, an operation that the local shelter did not have money for.

Thankfully, before making any drastic decisions, the shelter contacted Pet Refuge, a rescue organization in Indiana, to see if there was any chance they could take Rover. Pet Refuge is well known for their amazing group of volunteers and network of supporters, many of whom would understand the needs of a little guy like Rover.

After Pet Refuge agreed to take him, Rover arrived at Pet Refuge on July 18th. His surgery is scheduled for Monday, July 21st, but there is one small catch. The funds for Rover’s surgery have not all come in, which is why the volunteers at Pet Refuge have asked for Life with Dogs to share his story.

As they put it, “….Who doesn’t love a Chihuahua? Especially a nice little guy who needs an expensive surgery.”

Rover’s new foster mom also has a Chihuahua, which will help his recovery to be all the more enjoyable.

Any donation helps, even the small ones, as every little bit counts!