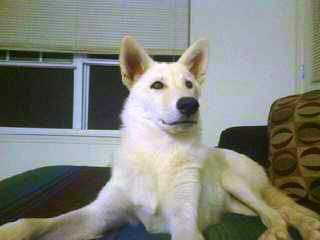 An Indiana family has their missing dog back thanks to some clever thinking.

The Arroyo family’s husky mix, named Raiden, escaped the home through a window. They posted about their dog’s disappearance on Indy Lost Pets, which passed along the info on Facebook. A fan saw the notice, and saw a Craigslist ad for a dog that looked like Raiden. The dog was being sold for $1,000.

Two family members, posing as buyers, went to see the dog. They negotiated on a price, and left, saying they would be right back after getting money from an ATM.

They got the police instead.

“So they went to the police station, got the police officer and then returned to the apartment,” said Christian Arroyo, who owns the dog with his wife. “They stayed outside while the police officer went upstairs to talk to them. They knew the jig was up pretty much as soon as they saw a cop at their door.”

Relieved to have their baby back, Christian said he will definitely be getting Raiden microchipped. He now knows just how important it is.