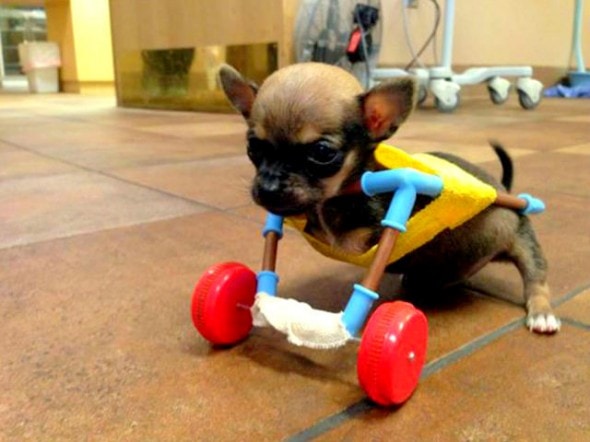 A teacup Chihuahua puppy surrendered to The Downtown Veterinarian in Indianapolis has been named Turbo and given a set of wheels lovingly made by the staff members.  Regular carts can’t be made until the dog is about six months old, and now this rowdy little guy won’t have to wait.

The puppy, named Turbo, was surrendered by a couple who didn’t know how else to care for him.  He was born was undeveloped front legs, and though his mother nursed him at first, the other puppies stopped letting him eat.

The couple said they went to several veterinary clinics looking for help for the one-month-old, who was struggling at only ten ounces.  All but Downtown told them they couldn’t help. 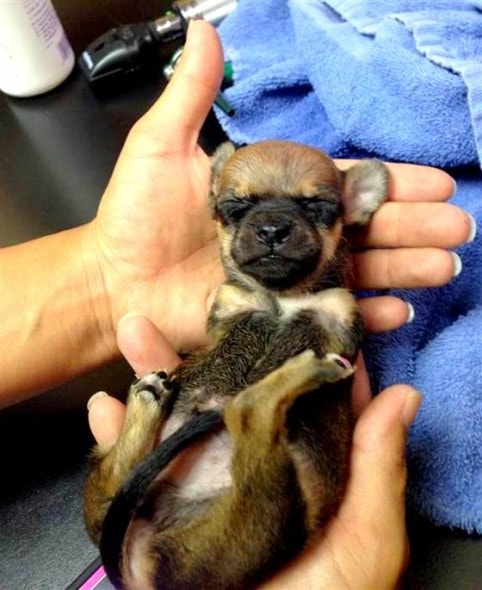 Practice manager Amy Birk was on her way out the door when Turbo was brought in, wrapped in a towel.

“The couple was beside themselves,” Birk said. “They didn’t want the dog to be euthanized.”

She knew something could be done, and refused to give up on him.

“I said, ‘I’m not euthanizing this puppy,’” Birk explained.  “Unless there had been another complication that affected his quality of life, like a cleft palate.” 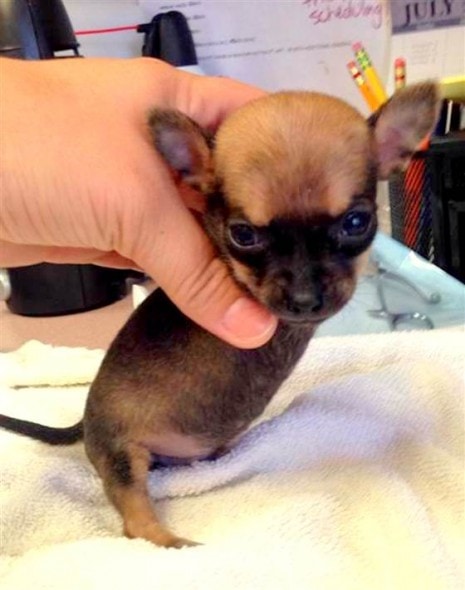 The couple signed Turbo over to the clinic so he could get the help he needed.  Missing legs aside, he was in pretty fair health – a positive sign for Birk.

“This is a Chihuahua.  They’re small enough and they can do well with a cart,” she said.

At only a month old, he was too small to be fitted for a regular cart.  He’d have to wait a few months until he was closer to his final size.  But once the staff got him eating properly, they wanted him to become mobile and confident as early as possible, so they got to work on making him some wheels.

They used a ferret harness, wheels from a Fisher-Price helicopter and the pipes from a kiddie welding kit.  Now Turbo is making loads of progress. 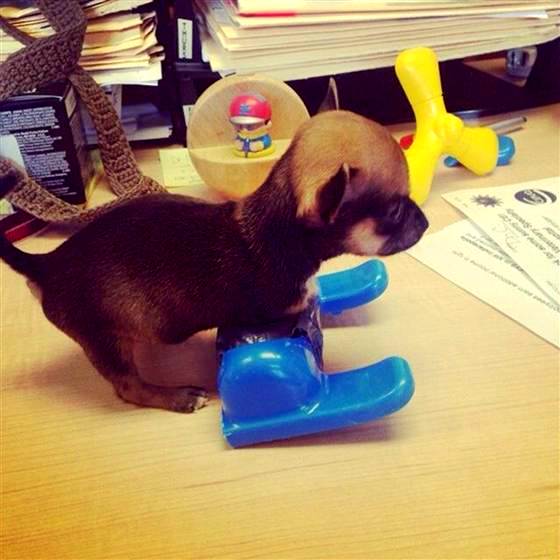 “We’ve been working with him every day,” Birk said. “Just today, he was able to crawl over and put himself on your arm.”

The now one-pound dog loves to roll around and play, and has physical therapy every day to strengthen his hind legs.  Birk has seen dogs in this condition before, and knows how they are able to overcome their disabilities.

“You’d be surprised how resilient they are.”

A number of people have expressed interest in making Turbo a family member, but Birk refuses to let him go to just anybody.

“He’s not a novelty,” she said.  “These types of dogs need a lot more care than other dogs… He’s got to go to a home that understands what his needs are.”