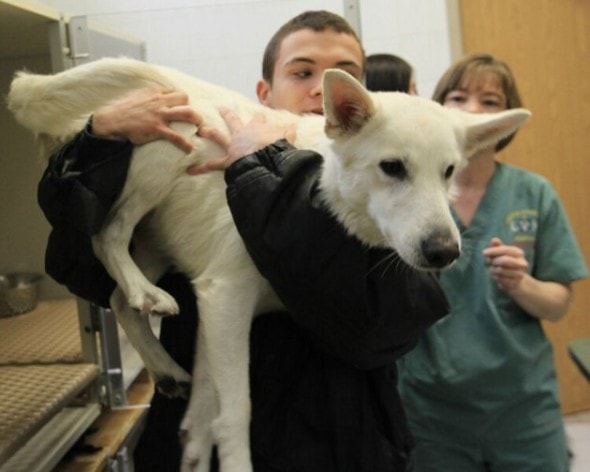 Saphir is just 2 years old, a pure bred german shepherd with a taste for adrenalin.  He managed to find his way from his backyard in East Windsor Ontario into the freezing and fast moving Detroit river yesterday morning and fortunately was saved by fire fighters.  His owner Ashley Dufour had gone out and left Saphir in the fenced yard so it was her brother Bobby who noticed the dog had somehow escaped.

Ashley’s grandmother then called the Windsor/Essex County Humane Society.  “They ended up calling us and telling us they found a white dog out on the river and we ran over there,” said Bobby.  When Bobby and his brother arrived on the scene they saw Saphir out on the ice having a grand old time while Windsor police officers and firefighters decided what to do.  She was about 50 meters offshore according to LaSalle fire Capt. Mike Mayea.

The rescue crew used a flat bottomed boat to get to Saphir.  “The ice was a little weak along the shoreline but we were able to manouevre the boat out there safely,” said Mayea.  “It broke through the ice a few times. We just worked our way out to the dog.”  But when they got there Saphir was having fun and did not want to be rescued.  “We had a little bit of a rough time getting the dog, he didn’t want to co-operate with us,” said Mayea.  After Saphir fell into the water for the third time they were finally able to get a hold of him and bring him in to safety.

“A human victim isn’t going to run away from us all the time, whereas the dog kept … he was afraid, he was scared, and cold, and not sure what was going on. We’d get close to him and then he’d run down the ice floe. It just made it a little difficult.”  Fortunately Saphir is none the worse for wear and was checked out by a vet and released the same day.  Her owners say they have no idea how she got out but will be sure to keep a better eye on her in the future.