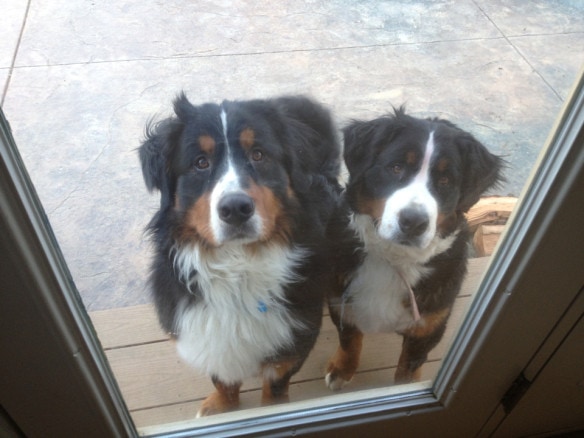 On February `12th Argus and Fiona, two Bernese Mountain Dogs, escaped from their yard when a tree branch fell and collapsed the fence that kept them safe in their yard. Tragedy struck when the dogs ended up in a neighbor’s sheep pen and that neighbor, Gabriel Pilotti, shot and killed both dogs. Now the public is demanding justice for Argus and Fiona.

Argus and Fiona’s owner, Mary Bock, said the whole incident occurred in less than 15 minutes. “It was just really vicious,” said Bock. The Bock family lives in a part of Chester County, Pennsylvania where sheep, horses and other animals reside in most yards. 2-year-old Argus and 1-year-old Fiona wandered into the wrong yard after escaping through the collapsed fence. Around 11:30 am Pilotti saw the dogs near his sheep, pulled out a 20-guage single-shot shot gun that he legally owns and fired at both dogs killing them.

The dogs hadn’t touched the sheep, but Pilotti told police he had not even yelled at the dogs are attempted to chase them away before shooting. The Bocks are alarmed by Pilotti’s actions and his attitude towards the incident. When William Bock asked Pilotti about the incident according to the Bocks Pilotti replied, “I shoot first and ask questions later.” The Bocks became even more horrified and outraged when a neighbor shared a phone-message recording they had received from Pilotti. On it, Pilotti says, “Hey, Bob, this is Gabe. Two shots, two more dogs.”

Neighbor Robert Boden says Pilotti is a conscientious animal owner and a good neighbor, though he does not condone Pilotti’s recent actions. About a year ago, Boden said, two pit bulls attacked and killed several sheep and an alpaca in a neighborhood. Pilotti witnessed those attacks and shot those dogs as well. Boden figures Pilotti was relating Argus and Fiona’s presence to the earlier attack, but Boden does not agree with Pilotti’s recent shootings. “There were other alternatives than shooting them…I think he did an injustice by shooting them,” Boden said.

Meanwhile On Monday William Bock posted a message on Facebook explaining what had happened to his family’s two dogs. “It just kind of exploded from there,” Mary Bock said. Within 24 hours more than 1,000 people had joined the Facebook page “Justice for Argus and Fiona.”

The Chester County District Attorney has not filed charges against Pilotti, citing a portion of Pennsylvania dog law that says, “Any person may kill any dog which he sees in the act of pursuing or wounding or killing any domestic animal.” However, this could change. “We have gotten new information and are continuing to investigate,” said First Assistant District Attorney Michael G. Noone. Experts in state dog law disagree with the District Attorney’s interpretation of the law and argue that if the dog is simply found among animals and not “pursuing” “wounding” or “attacking” the farmer must detain the dog. There is hope that by Tuesday the district attorney’s office will announce animal charges against Pilotti as early as Tuesday.

The Bock family has contacted State Senator Andy Dinniman to see if state law can be changed to avoid this situation. Dinniman said he and Senator Richard Alloway are working on a bill that would permit civil suits to be filed for up to $12,000 for the harm or death of a dog. Currently dogs are only assessed at their cost in lawsuits.

The community of Chester Springs has become tense with anger over the situation and there are  rumors that people might even try to kill Pilotti’s sheep. “Now we have a people issue,” said Boden. “I’m afraid somebody is going to do harm to somebody one way or the other over this.”

35 thoughts on “Public demanding justice for Argus and Fiona”