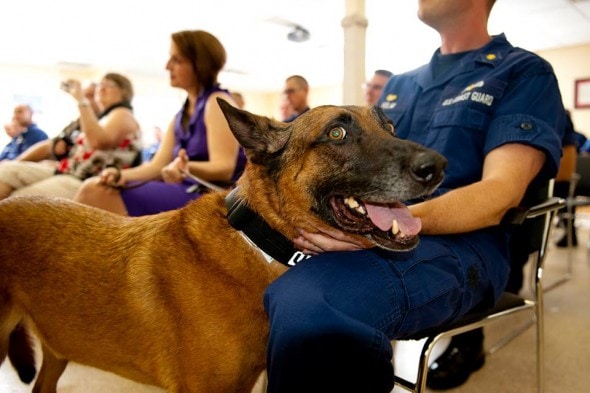 After nearly a decade of service Chief Petty Officer Ferro is retiring. The Belgian Malinois spent 9 years as a Coast Guard Explosive Detector Dog at the Maritime Safety and Security Team in Galveston, Texas.

Ferro has spent his whole career paired with Petty Officer 1st Class Shane Coleman.  The two won’t be separated though, after retiring Ferro was adopted by Coleman and his wife.

“Spanning the better part of a decade, the partnership between Ferro and Petty Officer Coleman has been a great example of the versatility for which the Coast Guard has always been known,” said commanding officer of the MSST Galveston, Lt. Cmdr. Chad Holm. “In a sense, they have been pioneers in the post 9/11 Coast Guard by employing traditional capabilities to effectively combat modern security threats in our nation’s ports.”

A ceremony was held for Ferro at the Maritime safety and Security Team building on Monday morning. One dog handler and K-9 remain at MSST Galveston and a new K-9 and handler will be graduation on Friday and reporting to the unit to replace Ferro.