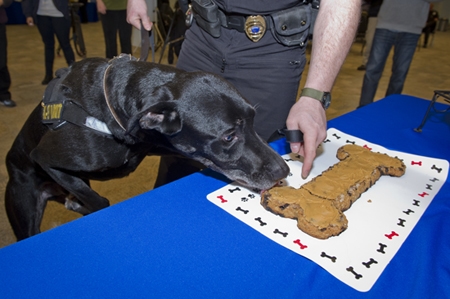 Stryker may be retired but he is just beginning a new career, as a therapy comfort dog.  The nine year old lab mix who was rescued by Progressive Animal Welfare Society (PAWS) has had a distinguished career as a bomb detection dog for Boeing since 2006.  His working life will be different now, as he will spend his time at the Snohomish County Senior Center where he will offer a affection and love to anyone who might be in need of a gentle reminder that someone cares.

At Boeing, Stryker worked with his handler Chad Olson, and was one of 12 K-9 teams to inspect planes before deliveries, incoming freight, vehicles, luggage, packages and items left behind.  They also searched for firearms and bombs, as well as protecting visiting dignitaries.  The highly skilled dog also has a soft side, and loves to sit with people, shake a paw, and give and receive hugs.  All of that will serve him well in his new role as therapy dog.

In a speech (written by Michael S. Wiegand) read by his handler at his retirement party Stryker said “To my K-9 buddies and trainers: Treasure this — it goes by too fast. And to the rest of you, treasure us. We keep you safe and we do even if it means putting ourselves in danger.”

In retirement Stryker will continue to live with Olson, enjoying a life of leisure playing with his dog buddies, his coveted toys, and sharing naps with Sabby, his feline companion.  He is a wonderful example and reminder of the many ways that dogs make our lives richer and happier.