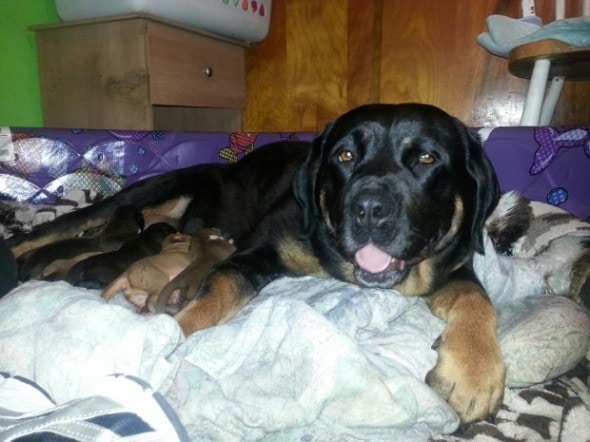 A stray Rottweiler mix has become the saving grace for six orphaned puppies. Bertha lost her own litter of puppies while trying to give birth, but has now adopted the six puppies who were in need of a mom.

Bertha was scheduled to be euthanized at a South Bend, Indiana animal shelter when a volunteer with Second Chance 4 Pets Network offered to take her. Volunteers from Guardians for the Green mile, a group that transports dogs to rescues, went to pick Bertha up and found that she was already in labor.

The volunteer who had taken Bertha in watched her carefully while she was in labor, but after 24 hours the puppies still hadn’t come.

“They took her to the vet and they did an emergency C-section on her but all of her puppies, eight of them, were dead,” said JoAnn Palko, president of Second Chance 4 Pets Network.

Second Chance 4 Pets Network knew that Bertha could be of help to another rescue though. They put the word out that they had a lactating dog that could help puppies that were in need of nursing. Lakeshore PAWS responded, they had just picked up six newborn puppies from a shelter in Oklahoma City.

One of Lakeshore PAWS volunteers had gone down to Oklahoma in the aftermath of the tornadoes to help when they came across the six puppies. Their mother had been deemed aggressive and put down before she could be rescued. So Lakeshore PAWS stepped in to save the puppies and then brought them to Bertha to see if she could help.

Bertha was unsure of the puppies at first but soon she was cleaning them and soon was bonded with the six puppies as if they were her own. Bertha helped save the puppies and they helped fill the grief she was feeling over her own puppies.

“She’s a fantastic mom,” Palko said. “My foster says she doesn’t even want to go outside to go to the bathroom and leave her puppies.”