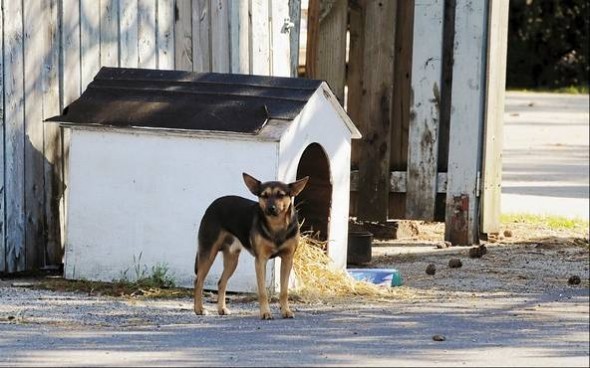 Max is a stray dog that has a lot of love and support from his community in Charleston, Illinois. Although Max won’t let anyone get too close to him, he has several people who are looking after him and making sure he is well fed.

Joe Evans opened his restaurant, Smoky’s House BBQ, a year and a half ago. Evans noticed a stray dog hanging around the area. Evans started calling him Max and has been feeding him ever since. Back then Max was very skinny, but today he’s a well fed pup thanks to Evans and several others.

Courtney McElwee brings Max food twice a day, stopping as she commutes to and from work each day. She also put a dog house in the restaurant’s parking lot for Max. Brenda Price, who works at the BP gas station nearby, also keeps an eye on Max and feeds him every day. When she arrives at work Max runs and meets her in the parking lot. Max won’t let her get too close to him, but still acts very happy to see her. He gives a similar greeting to Evans and McElwee, excited to see them but never letting them get too close.

Evans thinks the dog was probably mistreated. “Half of me wants to see him get caught and adopted, but he’s not adoptable unless you’ve got five acres and let him run around,” he said. Max was almost caught once. Coles County animal shelter had set a live trap for him and he was caught. Someone let him out though, and Max won’t go anywhere near traps now. “That dog is street smart,” said shelter manager Julie Deters. Deters thinks Max is doing okay in his current situation and isn’t sure taking extreme measures to catch him would be in his best interest.

The people who care for Max are torn about his situation. When McElwee initially met Max she wanted to catch him. She worries about medical conditions that might be undetected. She also tries to be realistic about his situation, “He’s kind of living like someone’s outdoor dog. If he’s caught, he’s probably going to be miserable,” she said. Though Max might not have a traditional home, he’s got a family in Evans, McElwee, Price and many others who keep an eye on him. “He’s got people who care about him,” said Evans.