Seventy-eight-year-old Sue Prickett was out walking her terrier named Suki and a friend’s dog in the woods of Sherborne, Dorset, when Suki ran off and fell into a deep hole getting trapped. The pet owner tried pulling her dog out but the pet cried out in pain and slipped deeper into the hole. It was late and dark, and if it wasn’t for the power of social media, Suki would have died in the hole. 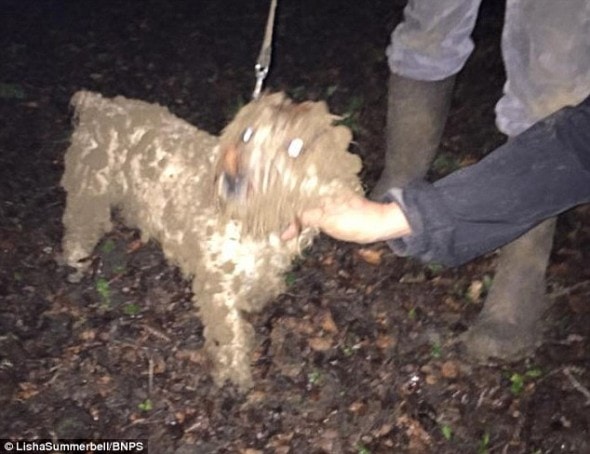 Prickett was terrified as she listened to her dog’s cries for help. With no one around to help her, the elderly woman rushed back home to return her friend’s pet and call for help. The worried pet owner called RSPCA but they couldn’t come out to help because it was too dark.

After not finding anyone to help her, the woman returned to her dog’s side and fortunately 50-year-old Shaun Summerbell  came across the anxious woman as he walked his dog in the same area, and offered to help.

Mrs. Summerbell took to Facebook and used her Facebook wall to ask for help. Within 20 minutes of her status update, dozens of willing animal lovers showed up at the scene with tools to help free the pet.

” Somebody brought a tripod with a light on it and suddenly there were torches, spades and pick axes,” Prockett told The Daily Mail. “Two of the men were off-duty firemen and were very helpful. One girl even came out in a giraffe-print onesie.”

After the community came together and dug a four feet trench, Suki was rescued.

The dog was covered in mud and fortunately had no injuries. She went home, got a needed bath and lots of hugs and kisses from her owner.