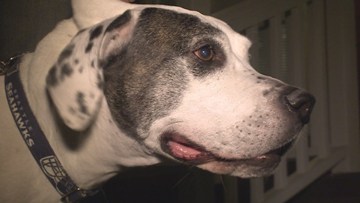 There is a dog killer on the loose in Colorado Springs, Colorado.  In the past two weeks, two dogs have been shot in that area, with one of them surviving and the other losing their life.  Terry Shattuck is the founder of So Much for Pets Organization, and is offering up a $1,000 reward for information leading to an arrest of a suspect in this seemingly unsolvable case.

“I honestly can’t understand why people think that animal’s lives are any less valuable than our own. Again, I thought about what if somebody did that to my own dog? I’d be devastated,” said Shattuck.

Back on 1/19/2015, police launched an investigation into who had shot a dog on a running trail in Colorado Springs.  The incident occurred on the trail that goes near Kiowa and Pike’s Peak Avenue, and had some similar traits to a shooting taking place before that.  This has had investigators looking into any and all possible connections between the shootings.

Both shootings saw a random, unknown person emerging from the side of a running trail, going straight up to a person walking their dog, and without saying a word, the suspects draws a gun and fires at the dog without saying a single word.  After, the suspect simply vanishes.

Sean Cook and his American bull dog, Lea had been walking on Shook’s Run Trail when they were also visited by the same person on the same day.  He walked onto the trail from off to the side, walked up to Lea, and shot at her.  Thankfully, the suspect missed, but still scared the crap out of Cook and Lea.

“I was like, easy, she doesn’t bite or anything like that. All the sudden I heard a pop. It was like a 9 millimeter sound. I was amazed,” said Cook. In an interview with news stations.

Slightly over a week ago, news stations in the area were showing the story of Sydney, an Australian shepherd.  Sydney had been in the park with her human playing fetch when a random guy walked over to her dog and her.  Before she could go grab Sydney to prevent her going up to this stranger, Sydney’s human witnessed this person take out a gun and shoot her dog to death right in front of her.

“Before I had a chance to get her to come back to me, he pulled out a gun and shot her, several times,” said Sydney’s human in an interview with the news.

This same suspect is wanted in relation to all of the shootings and attempted shootings.  Police in Colorado Springs are exhausting every option they have at their disposal to find the suspect or suspects if not all done by the same person.  Any possible similarities in MO to any other crimes in the area are also being sifted through.