A startling and disturbing discovery was made at a Kentucky apartment complex last week.  Calvin King said his wife was just taking out the garbage when she found an injured dog in the dumpster of their Nicholasville apartment.  The injured chihuahua mix was suffering from an infection and several gashes to  her back which turned out to be puncture wounds and may have resulted from an animal attack.

“It was just laying there. Then it raised its head up and looked at me and I thought it was a toy dog” said King. He called over his neighbours to assess the situation and they decided to bring in animal control who took the dog to an animal hospital for treatment.  They are also investigating what happened and trying to track down the owners of the aging dog. 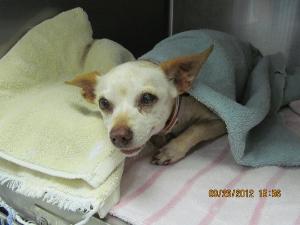 “I think it’s disgusting that anybody could be that heartless, to just throw it in the dumpster like it’s trash,” said neighbor Julie Proctor.  It is a mystery as to why people dump their pets in the garbage when there are shelters, rescues, and even pet stores  that will take on unwanted animals.  Fortunately this pup’s life was certainly saved by her compassionate rescuers including King who said, “I didn’t think that dog was gonna make it, no. I thought it was gonna die right there. I thought it was gonna die in the dumpster.”

It is also a good reminder to all of us to pay attention when something looks unusual, as a less observant person may not have noticed the tiny creature huddled in the bin.  This one will have another chance at a good life thanks to the Kings and their neighbours.