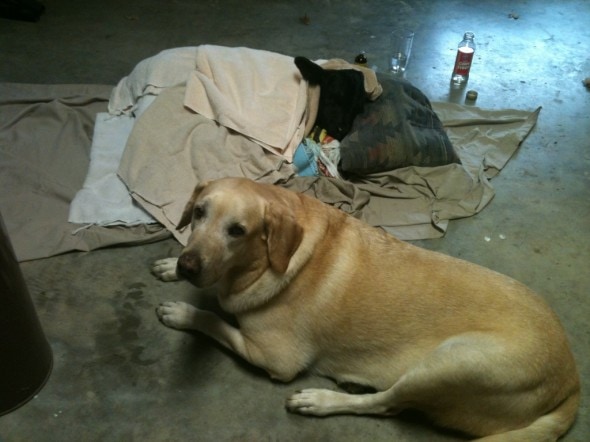 Bosko, a yellow lab, found a young calf dying of hypothermia on his family’s ranch. Bosko came across the calf in the ranch’s feed lot and went to get help from his family. The family brought the calf into shelter, where they wrapped him in blankets and heating pads and gave him some antibiotics.

The family recounted how the calf’s nose was frozen stiff and his eyes looked dead. The calf was barely breathing. His mother had become too weak to care for him. The family brought the calf out of the wet and cold and as the calf clung to life wrapped in blankets and heating pads Bosko refused to leave his side.

After 4 hours of faithfully lying next to the calf, the calf which the family decided to call Zeke, started to show signs of life and his breathing became more regular. The family was able to coax Bosko to come inside the house and their other dog Duke took over Bosko’s watch and stayed with the Zeke during the night.

The next morning Zeke began to eat and in a few days he was up and about. The family kept Zeke safe and warm inside their old chicken coop for a few weeks before he was ready to return to the other cows. Now 6 months later he’s doing well. Zeke is a little smaller than the other cows, but is alive and healthy thanks to Bosko.