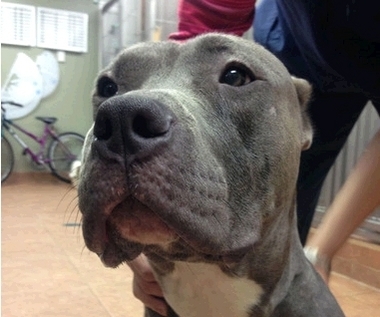 A foundation called Frankie’s Friends which “promotes better treatment of pet cancers and other diseases; better access to veterinary care for pets, and better support for the families who love them,” had partnered with staff and students from the school to raise money by organizing a 5 km run.  “After a recent incident in which their principal’s dog required surgery, the school decided to raise money for Frankie’s Friends, which helps families who otherwise could not afford life-saving emergency care for their pets,” said the foundation in a release.

The event was held prior to Sandy’s arrival but the $1300 raised ended up going to the Ortiz family to pay for Bruno’s surgery to repair a complex fracture to its front limb.  The foundation is named after a beloved greyhound named Frankie who lived with cancer and heart disease for 7 years before passing away in 2007.  In addition to helping families in financial need care for sick pets, the foundation also funds pet health insurance for the entire lives of police dogs serving in the Detroit area and participates in efforts to find cures for pets with catastrophic diseases through groundbreaking research and treatment.

In this case, because the donation covered Bruno’s care, the Ortiz family was able to use their scarce funds find a new home to rent in the wake of the catastrophic hurricane, and for that they are very grateful to the generous staff and students at Bernstein Intermediate School.