On July 11, 2014, customers outside a Save-on-Foods store in Maple Ridge, Vancouver, Canada, rescued a Rottweiler trapped inside a parked, hot car.

According to News Vancouver, the temperature that day was 95 degrees Fahrenheit (35 Celsius) and the dog was drooling, panting and barking inside the parked Hummer. 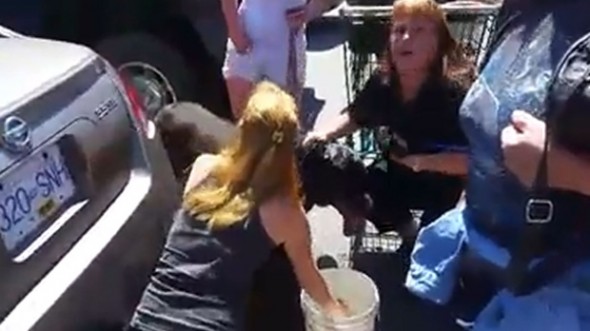 The car windows were cracked, but the space left opened was not enough to cool the inside of the car and the dog left in it. Fortunately, a concerned citizen and store employee was able to unlock the car doors and free the pet.

The dog was taken to a shaded area and given some water. While rescuers discussed calling authorities, the pet’s owner returned from the store, collected his dog, and left immediately.

Bystanders said the dog owner showed little interest in the well-being of his pet, he was just upset his pet was taken out of the vehicle.

It is not sure if authorities were called or if the dog owner will be held responsible for the abuse committed, but what is known is that thanks to the courageous group of people this dog’s life was saved.