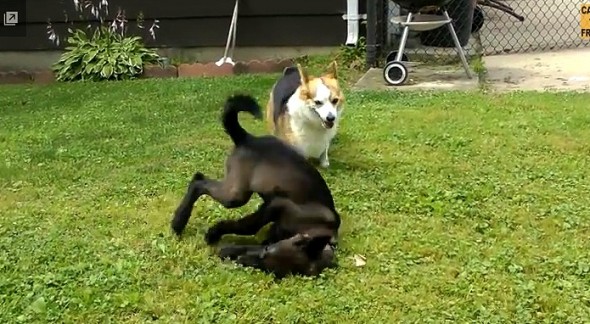 Lorne is a ten-week-old (in this video) high content wolfdog. He was born at a zoo in Georgia who breeds a select number of wolf cubs to be used for educational purposes and for ambassadors for their species. Lorne’s brother, Wyatt, can be seen at Six Flags Discovery Kingdom in Vallejo, California. Lorne is being raised with the hope of using him in educational talks to raise awareness for an often misunderstood animal.

Lorne is a subspecies of the Grey (or Timber) Wolf. He was born in April (wolves are only born in the spring, unlike domesticated dogs), and until he came to me was used in meet-and-greets at the Georgia zoo. Two weeks ago he left on a trip across the United States from out west to Chicago.

During his journey there he accidentally swallowed a small slip lead and had to have emergency surgery. The surgery was a success and as you can see from the video, Lorne is doing extremely well. The doctors could not believe how fast his recovery was. When he woke up from his surgery, he acted as if nothing had even happened! Ten days later, after Lorne got some rest, we drove from Chicago back home to Arizona on a four-day adventure. We stopped in many states and Lorne met many different people, things, and places. Watch for a new video soon of our road trip together.

You can see Lorne’s other videos by clicking here.