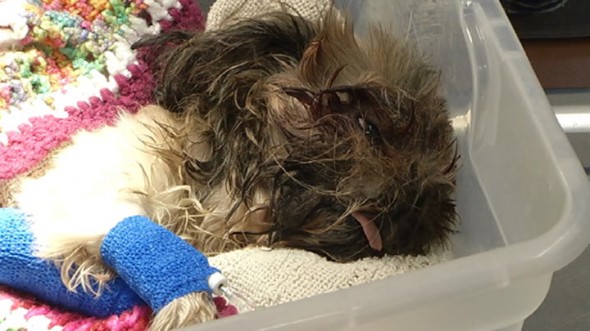 A beaten Kansas City dog left in a pet carrier and thrown in a dumpster like trash has been rescued and is recovering.

A construction worker discovered the Shih Tzu in the dumpster near ACE (Afrikan Centered Education) Academy.

“The carrier was pretty large. It would take up quite a bit of space inside the dumpster so that may have been what caught their eye. But fortunately, they did look in there and got him out and now we are monitoring him,” said Tori Fugate, Manager of Marketing and Development with the KC Pet Project. “When he came in he was very still. His injury to his head was causing him to just… he was just very, very still when he got here.”

It was believed that Ace may have been shot in the head, but X-rays did not show a bullet.

“Ace has a skull fracture and puncture. He is getting oxygen and meds to keep his brain from swelling,” said a representative from the Emergency Hospital Vet.

On Sunday, the two-year-old dog began showing an interest in food, and is opening his eyes. It is believed he will make a near-full recovery.

“He will hopefully bounce back from this and he may have some neurological damage, but we really won’t know until a later date,” Fugate said.

Ace was taken in to a foster home on Monday, where he will likely stay for the duration of his recovery period. Applications for his adoption are already stacking up, but it is too early for him to permanently placed.

If you would like to help fund Ace’s recovery, please visit KC Pet Project.