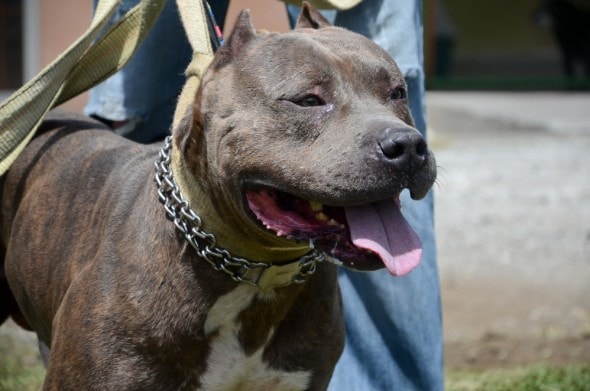 Lawmakers in Costa Rica, before their final session and then leaving office, got together to pass a bill that if signed would put a permanent ban on dog fighting.

“We are very pleased that this slipped right under the wire,” said regional director for the Humane Society International-Latin America, Cynthia Dent.

There had been a draft bill the Humane Society started working on almost two years ago.  They were attempting to make it easier to enforce dog fighting laws in court.  Even though dog fighting is already illegal, there isn’t much in the way of real legislation in place to pursue lawsuits in court.

The way things go as of now, dog fighting organizers only really had dogs confiscated, but there were no other real punishments on the books.  When a man had a $200 fine levied on him for being found guilty of hosting dog fighting on property he owns, it was the first ever fine ever given to someone for this offense in Costa Rica.

Not only does the new ban clarify dog fighting as a true criminal act, but there are to be stiffer penalties for being convicted.  These include prison terms of up to three years for a first offense, and steeper fines to be handed down to offenders.

This ban goes just a bit farther too.  Aside from just banning the fights, any and all events that could cause aggression, abuse or injury to dogs.  The American Stafford Association, another big proponent of this bill, helped to introduce specific bans on events where dogs are forced to pull heavy weights, and something called “pole jumping.”  Pole jumping involves stringing up a piece of meat on to the top of a pole, then a dog is encouraged to jump up and bite into it, and hold on for as long as possible.

“It’s a sport that is utilized to train dogs to fight,” said Hector Valverde, a representative of The Stafford Association.  “It entices dogs and makes them nervous and jumpy.  It can cause joint problems.”

Perhaps one of the biggest steps taken to beef up legislation is the introduction of an “offenders list” for those found to be organizers of dog fights.  They would be required to register with the Animal Health Service in Costa Rica, hopefully making it more difficult for them to get their hands on aggressive dogs.

Current president, Laura Chinchilla, could sign the bill into law at any time.  If she does not, the job will fall to Luis Guillermo Solis, her successor, as of the 8th of May 2014.  Solis is an avid supporter of animal welfare.  It was a large part of his running platform, and got a mention in his acceptance speech.  His party, The Citizen Action Party, sponsored the bill.