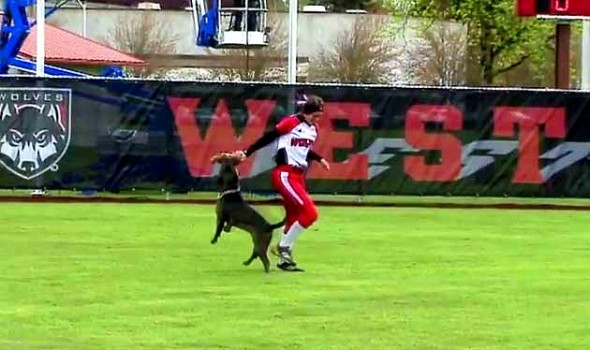 Usually a playful dog will go after a ball, but the dog who interrupted a college softball game on Sunday wasn’t interested.  Instead, he made off with two of the players’ gloves before being escorted off the field.

A fan’s pit bull darted onto the field during game 1 of an NCAA Div. II softball doubleheader between Western Oregon and Simon Fraser University.  He got in through an open gate and proceeded to romp around the field, stealing gloves from two Western Oregon players.

Announcer 1: “Right to Williams at third, gets it over to first and there’s a dog on the field!”

Announcer 2: “Oh, boy! That’s something you don’t see every day.”

The dog made his way to pitcher Kelli Demianew before being distracted by shortstop Melanie Pfeiffer, who was armed with a glove and the ball.

Next up was left fielder Danielle Harcourt – the second robbery victim of the day. 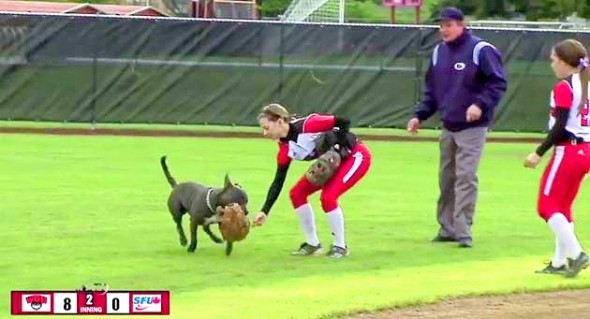 Announcer 2: “That’s REALLY something you don’t see every day.”

Announcer 2: “He’s not giving the glove back.”

The dog rebounded toward the infield, where several players tried to corral him and get their gloves back.  He then trotted to a woman near a tarp, hoping she was game for fetch, or just happy to find someone to show off his treasures to. 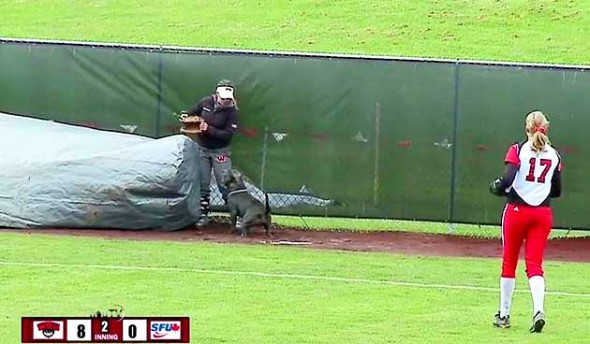