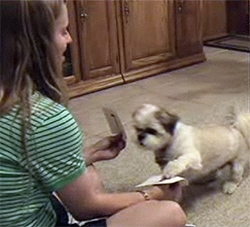 A few weeks ago a new video popped up on YouTube and immediately caught my attention. The dog in the video appeared to be counting, and until I read the comments, I was a believer.

At first glance Sonny seemed legit, but his video was slightly flawed: the sequence of numbers chosen made for a perfect left-right-left exercise, and commenters were unimpressed. They declared shenanigans, and when I watched the video for a second time I was convinced they were on to something, and decided to move on.

Determined to prove his abilities and silence the doubters, his owner has released a new video, and has gone to the trouble of adding a second camera to dispel any accusations of body language cues. This version includes selections that are not left-right-left, making for a more convincing performance, encouraging speculation and drawing additional criticism from the peanut gallery.

I’m no trainer, and these eyes have spent too many hours in front of a computer, so help me out. What say you? Is Sonny the real deal, or are we just witnessing some very clever editing?