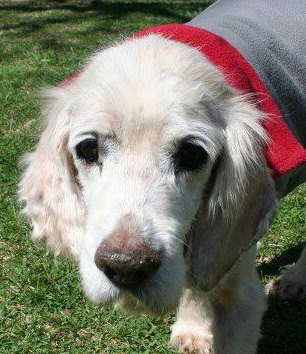 A courtroom in New Jersey erupted into cheers yesterday as a couple was sentenced to six months in jail yesterday for the abuse of their 17-year-old dog Sammy.

Back in March of this year Keith Morgan brought a Cocker Spaniel named Sammy to the Associated Humane Society in Tinton Falls. He claimed he had found Sammy in a garbage bag on the side of a road.

Sammy was malnourished, his fur was covered in urine and matted so badly that he couldn’t stand.

Morgan was first seen as a hero for finding the dog and even gave television interviews. Upon further investigation and thanks to an anonymous tip it was discovered that Morgan and Shauna Ewing Morgan were the owners of Sammy and they had owned him for at least nine years.

Jail time wasn’t guaranteed in the sentencing but when Judge Robert LePore announced that the defendants would spend six months the many Sammy supporters that had shown up for the sentencing cheered.

“Unless these individuals are imprisoned for their depraved, cruel and heinous conduct, such acts of animal cruelty will continue worldwide,” said Judge LePore. “The lack of care provided to Sammy was inexcusable.”

In addition to six months in jail the sentence also included a $1,000 fine, $13,500 in restitution to the Red Bank Veterinary Hospital and they couple is banned from ever owning a dog again.

Sammy thankfully recovered from his neglect and was adopted by his foster family.