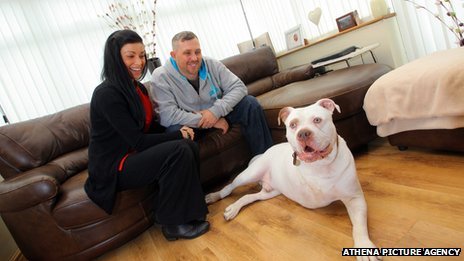 Ceri took Teeto to the veterinarian in July after he saw a dog being diagnosed with cancer on TV. That dog had a similar limp to one that Ceri had noticed in Teeto. “I looked at Teeto and he looked at me as if to say, ‘You should watch this.’ It was absolutely crazy how everything fell into place. If I hadn’t seen that show, we would have lost him.” The visit to the vet revealed Teeto did in fact have cancer. His treatment would require an operation and chemotherapy that would cost the couple more than 7500 pounds, the amount their dream honeymoon cost.

Although the couple was looking forward to their honeymoon they didn’t think twice about using the money to treat Teeto. “We told the vet it didn’t matter about the money, just do whatever it takes to make him better,” Clare said. Teeto had to have his right leg amputated and undergo chemotherapy to fight cancer in his right shoulder.  The Morgans travel over 80 miles every three weeks to get the necessary chemotherapy treatment for Teeto.

Teeto is handling the treatments well and his vets are impressed with how well he is doing. The Morgans are happy that Teeto is getting the treatment he needs, no matter what they had to give up for it, “We can go on a honeymoon again when we’ve saved up, but a dog is for life and we want Teeto around for a lot longer.”

3 thoughts on “Couple sacrifices their honeymoon to save their dog”