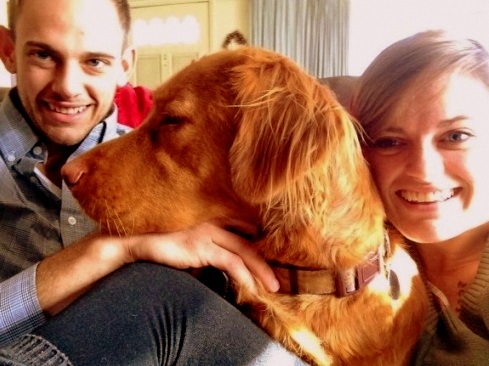 When Caitlyn Walker and Randy Kersteer’s dog, Eli, went missing from a friend’s yard, they were devastated. So they spent a week camping out in the backyard, hoping they’d see him. But what brought Eli back to them was something special they had cooked and set up for him.

Eli went missing on November 1 while he was being dogsat by a friend in Courtdale, Pennsylvania. Caitlyn and Randy did what most owners would do – they hung flyers, splashed his photo on the internet, and had day and evening search parties. But there was no trace of their boy.

So the couple decided to set up camp in the friend’s backyard, hoping that Eli – who loves camping – would see or get a whiff of them.

“I’m sure the neighbors thought we were nuts,” Caitlyn said, laughing. “We had our clothes strewn all over the yard, hanging from trees, hanging from the car.”

No Eli. But what the Nova Scotia Duck Tolling Retriever did catch a whiff of could bring almost any dog running – a pound of bacon and “stinky” bologna! Nineteen days after going missing, Eli was lured into a live cage trap loaded with a pile of meat fit for a dog king. He had lost 10-15 pounds and was covered in ticks, but Caitlyn was overjoyed that he was alive and safe.

She and Randy were amazed by and thankful for the outpouring of community support in their search. Strangers would help them on their daily searches. One of these people is Ellen McCormick, creator of the Facebook page Lackawanna and Luzerne County Lost Dog Project. Seeing what bereaved dog owners go through on a regular basis, she was especially touched by the great lengths Randy and Caitlyn went to to get Eli back.

“Their love for their dog inspired me,” she said. “Someone cares so much about their dog they camp out?”

Randy says Eli is worth it. He had been abused as a puppy, and won their hearts over the moment they saw him at a shelter. They knew they would do whatever it took to find him, which for Caitlyn, meant driving over an hour each way every day to Larksville from her home in New Jersey.

“He’s just my little sunshine,” she said. “He evokes this love out of us.”

After a visit to the vet, Eli was taken home, and recovered with a bit extra tlc.