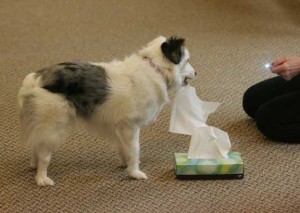 When Annie Hudson first adopted Taryn, a deaf miniature Australian shepherd, she was apprehensive about taking on a dog that couldn’t hear. Now over a year later Hudson would adopt another deaf dog without any hesitation.

Taryn was born deaf. A double-merle mini Aussie the same genes that give her a snowy white coat are likely the cause of her deafness. At seven years old Taryn found herself at Mini Aussie Rescue and Support when her owner gave her up. Then Hudson came along and gave Taryn a new life, but not without some hesitation. Not sure about how to handle a deaf dog the Mini Aussie Rescue put Hudson in contact with other people who had deaf dogs. “Most of them said, ‘I would adopt another deaf dog without reservations,’ and now that I have one, I totally agree,” said Hudson.

Once Hudson got Taryn home she set out to find a dog trainer who could help Taryn live a happier life. That’s when she found Joey Iverson, a Sammamish trainer who after 15 years of dog training had some experience working with deaf dogs. Iverson realizes that even if a dog has limitations they are still capable of learning, his method of teaching just needs to be adjusted for each dog’s needs. “I think it’s one of those things where it is possible to continue to give our pets greater and greater quality of life regardless of their limitations, whether its blindness, deafness other types of physical limitations,” said Iverson. “They are such fantastic learners. We just need to look at it from a different way and adjust methodologies.”

In his training Iverson uses a marker, something that immediately tells the dog that they’ve done something right. For dogs with hearing it is usually a clicker. Iverson easily adapts for deaf dogs like Taryn by using a flash light instead. Using this method Iverson and Hudson began teaching Taryn simple tasks. Soon Taryn was becoming less timid and really enjoying learning new tricks. Iverson and Hudson soon saw the potential Taryn had and how she could help bring joy to others.

Hudson works as a dietician at Providence Marianwood, a senior care center. Iverson and Hudson started working with Taryn on tricks and games she could play with the residents there. “We just thought of ways that she could have confident behaviors and be able to interact and provide enjoyment for everyone,” said Iverson.

Taryn now plays dice games, bowling and performs all sorts of tricks to the enjoyment of everyone at Marianwood. “I think that you can see the joy on their faces,” said Arlene Carter, an employee at Marianwood. “They’re interested; they are involved. And also because they live here and a lot of them can’t get out, it is really critical that people come in too, so that they have a better sense of community.”