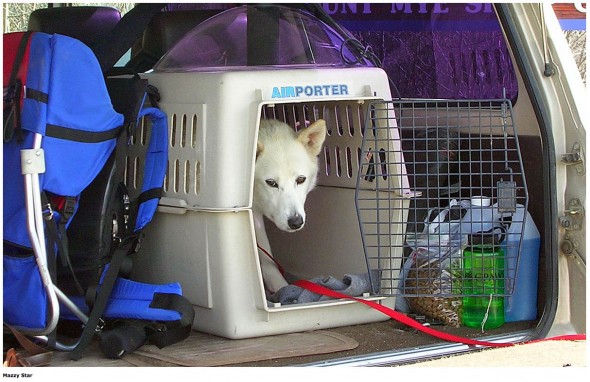 Karen Clyde, her husband and three children recently set out from their home in Whitehorse, Canada, for a family camping trip along the Russian River in Alaska. Accompanying them were their three dogs. Mazzy, Clyde’s 15-year-old, three-legged, deaf husky managed to escape one night from the campsite, likely the result of an unlatched kennel door. Of all the members of Clyde’s family (human and canine), Mazzy had been with her the longest.

A desperate search began. “You can’t call her because she’s deaf,” said Clyde, so she spent hours driving around the campgrounds, spreading the word to fellow campers, and putting up lost dog posters. Employees of the campground soon joined the growing search.

Weighing on everyone’s mind was the fact that the Russian River campground offers some of the best salmon fishing in the area – making it prime bear country. Home to Black bears and Grizzlies with their cubs, heavily traveled bear pathways could be seen all throughout the campgrounds.

After many days of waiting and searching, Clyde and her husband made the difficult decision to return back to their home in Whitehorse, without Mazzy.  “Leaving a dog who you think had a horrible ending, who was expecting you to save her somehow, was just terrible,” Clyde said.

Just one day after returning home, Clyde received the phone call she was hoping for. Russian River campground employee Sean Kedzie had found Mazzy hobbling down the road.  “When I got out of the truck she hopped right over and looked at me with ‘Wow, I am safe now’ eyes,” Kedzie recalled.

Clyde’s husband, Tom Jung, immediately made the 15-hour drive back to Alaska to bring Mazzy home.

Alaska Department of Fish and Game wildlife technician Larry Lewis speculates that Mazzy survived her time in bear country because the two species try and avoid one another. Bears and dogs, both possessing very sensitive noses, would have been able to sense the other and to steer clear.

Mazzy’s nose also proved sensitive enough to help her find her way back to the same campsite from which she went missing – it was there that Kedzie found her wandering.

When Mazzy was found, Clyde’s eldest son, Matthias, said, “You know, Mom, I don’t know why you worried because I knew she would come back.”