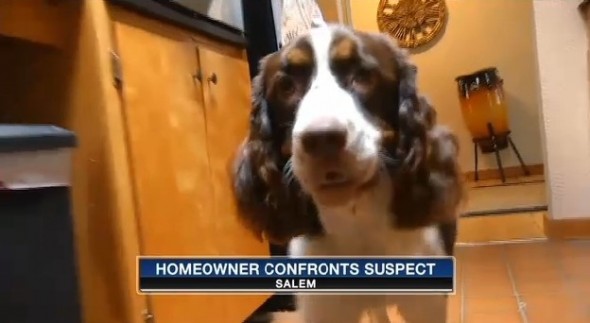 A deaf English Springer Spaniel named Bonnie alerted her owner to a burglar in their Salem, Oregon home on Saturday morning. Without her, the man may have escaped, but instead was trapped in the garage until the police arrived to arrest him.

Dan Strasser was awakened at about 6 am on Saturday by the sound of Bonnie excitedly prancing around the living room. Finding this strange, he got out of bed to see what she was doing.

“She smelled him because she does have a very good sense of smell,” said Strasser. “She jumped up and got all excited thinking someone was there to play.”

Bonnie is not your typical guard dog – she didn’t bark or try to bite the intruder, she just wanted a new friend. But her unusual morning behavior was enough to stop the potential thief. Strasser walked into the living room just as the intruder was laying hands on his laptop. The man attempted to flee, but instead of going outside, cornered himself into the garage.

“As you can imagine there’s a lot going on in his mind, like ‘How do I get out of this place?’ It’s dark and he doesn’t know it.”

While his girlfriend called 911, Strasser grabbed his gun and held the man in the garage until police arrived.

“There was a lot of, ‘I’m sorry,'” Strasser said. “He starts talking about how he wants to go home and see his kid and asks if I would please let him go. All the stuff you’d say if you’re caught and you don’t want to go to jail.”

Police arrested the man, who was identified as Thomas Lowell. He has been charged with burglary, criminal mischief, unlawful possession of methamphetamine and parole violation.

Lowell gained entry into the home through the back door, which Strasser kept open at night so Bonnie could let herself out. He says he will keep in closed and locked from now on!