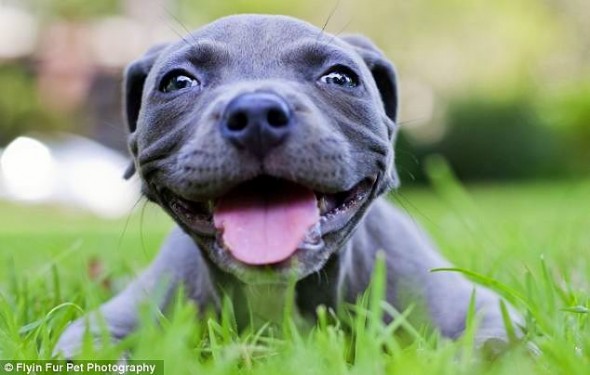 Harper is indeed a miracle puppy – she has defied death twice. A woman in Sanford, Florida saved her the first time when she noticed a wriggling bag being held by a man selling puppies in a Save-a-Lot parking lot. She asked him what was in the bag, but he refused to show her. She persisted, and he handed the bag to her, revealing a deformed puppy. Had this laudable woman not intervened, the puppy would have suffocated.

When Harper was rescued from the trash bag, she wasn’t given much of a chance for survival. She has pectus excavatum (literally meaning hollowed chest), or swimmer puppy syndrome. Most dogs born with this condition survive only a few days, or weeks at best. She couldn’t walk or even hold her head up.

Veterinarians and shelter staff agreed that it would be for the best if the puppy was put to sleep. But Erica Daniel, a regular at the shelter, wanted to take her home to give the little girl one final day, with all the love and comfort she could know in her short life. 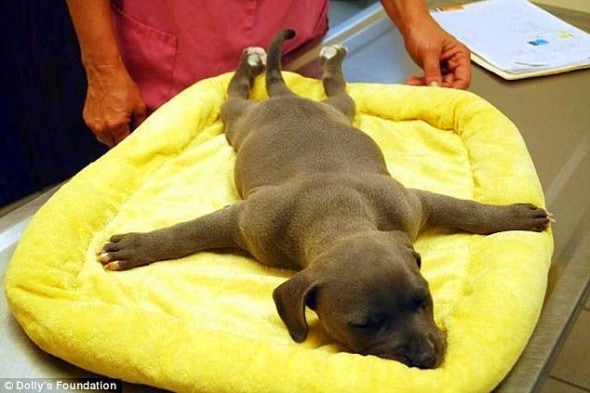 “I had to show her what it was like to be loved,” Erica said. “I’d planned on taking her home that night, letting her sleep in bed with us and having her humanely euthanized in the morning.”

But something miraculous happened, and all it took was a little love. Swimmer puppy syndrome caused Harper to lie flat on her stomach with her legs splayed out at her sides. 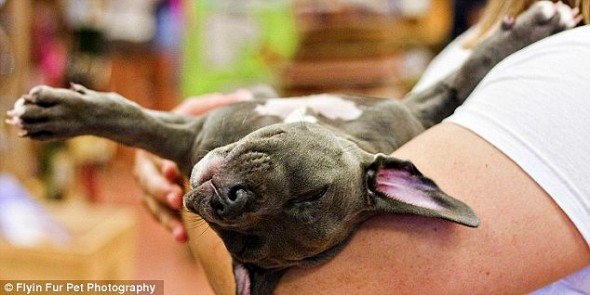 So Erica began gently massaging Harper’s legs, hoping to ease some of the tension in her muscles. Within hours, Harper began lifting her head and looking around. Her front legs became so flexible that she did the unbelievable and tried pulling herself around.

Erica knew that this puppy wasn’t destined for death just yet. She cancelled the euthanasia appointment and scheduled a meeting with a vet from the University of Florida for a second opinion, hopeful that Harper’s prognosis would be more positive.

The vet wasn’t as optimistic, knowing the degenerative bone disease, brain abnormalities and heart murmur that Harper would almost certainly be battling. But after performing some tests, it was determined that the puppy did not have the expected brain and heart problems. Despite the concave chest, Harper’s organs were just fine. Treatment was required, but euthanasia was not. 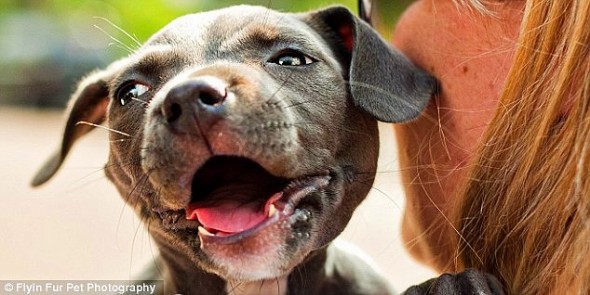 The Hip Dog Canine Hydrotherapy & Fitness in Winter Park, Florida found out about Harper, and offered to give her free massage and hydrotherapy to her. She took to treatment and before long, was walking on all four legs.

“She started out on grass, then carpet, then concrete. She still can’t walk on tile or hardwood floors, but she’s getting there,” said Erica, who earlier this year set up Dolly’s Foundation, an organization that rescues, rehabs and adopts out stray, neglected and abused bully breeds.

Swimming has been a boon to the swimmer puppy. Hip Dog therapist Bev McCartt said hydrotherapy is helping teach Harper what her natural gait should be.

“Her brain kicked in and by the end of her first session, she was like, ‘Oh, I can do this,’” Bev commented. “She’s a walking miracle. She’s a real testament to a dog’s determination to get up and just go.”

Now at 11 weeks old, Harper is walking well and is able to play with the 7 other dogs in Erica’s home. She believes Harper will be adoptable in about a month, that is, if she is able to give up the sweet puppy.

“The whole world was against her, but she’s such a fighter,” Erica said. “She’s a blessing. She’s awesome.” 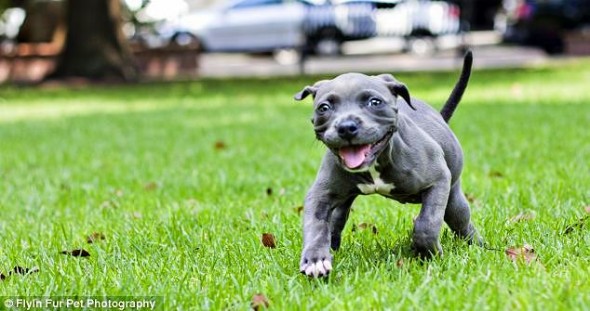