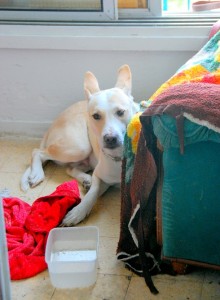 We often hear stories about hero dogs that save their owners from house fires or unwanted intruders but yesterday a remarkable dog named Louisa saved her owner from a rocket attack.  Alex Leibowitz, husband and father of 4 children, was home sick yesterday as bombs being fired from Gaza continued to drop on the  Sha’ar HaNegev Region in Israel.   Fortunately, he was not alone as his dog Louisa was there keeping him company.

When Louisa started to bark incessantly, and began behaving very nervously, Alex became annoyed and went back to his bedroom.  Her barking prevented him from hearing the rocket warning siren that was being sounded, and so he remained in his bedroom rather than heading out into the stairwell to evacuate.   The rocket that came seconds later hit the stairwell and sliced into the door to his apartment, but Alex was safe in his bedroom. 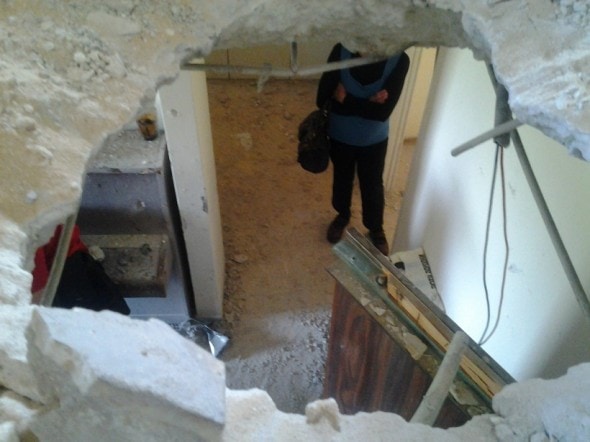 “It was a miracle. Had I gone down the stairwell if I had heard the siren, the rocket would have caught me,” said Alex. “It was as if our dog had some kind of sixth sense to know that a rocket was on its way,” added Olga, his wife. “Louisa’s barking kept my husband alive.”

In spite of the significant damage to their home the couple is feeling very fortunate to have such an instinctive dog.  “We have such a good dog,” said Olga, patting Louisa’s head as she now sits calmly on the porch. “We are lucky people today,” she adds as she surveys the large hole in the floor of her living room. “This could have been a much worse situation.”