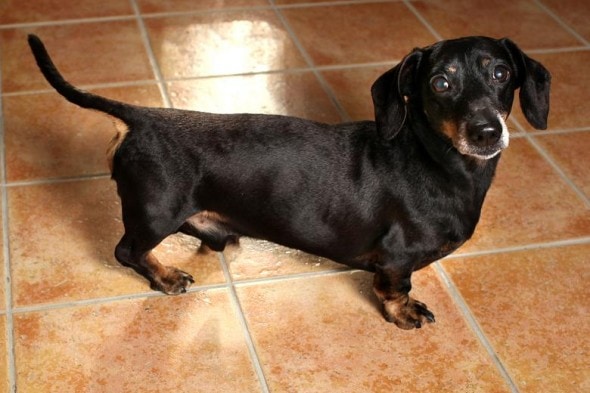 Thanks to researchers at Cambridge University in England several dogs, including a 10-year-old Dachshund named Jasper, are walking again. For the past few years, scientists at Cambridge University have been working with dogs suffering from paralysis to test therapies and cell treatments that reverse the damage. The scientists found success by using cells grown from the lining of the dogs’ noses. So far 23 dogs have seen improvement from injecting these cells into their spines.

34 dogs participated in the randomized, double-blind study that’s results have just been published in the neurology journal Brain. All the participating dogs had suffered severe spinal cord injuries, significant enough that 12 months after sustaining the injury they were unable to use their hind legs to walk and could not feel pain in their hind legs either. Scientists collected olfactory “ensheathing” cells from the dogs’ noses, cultured them in Petri dishes for several weeks and then injected them into their spines. 23 of the dogs had the cells injected while the remaining dogs were injected with a neutral fluid.

After they received spinal injections the dogs were tested at one month intervals on treadmills. Dogs who received the stem cell injections showed a considerable improvement that was not seen in the other group. The dogs were able to move their hind legs and coordinate them with their front legs. Jasper was probably one of the most successful participants.

“Before the trial Jasper was unable to walk at all. When we took him out we used a sling for his back legs so that he could exercise the front ones,” said Jasper’s owner May Hay. The sling is no longer needed for Jasper. “Now we can’t stop him whizzing around the house and he can even keep up with the two other dogs we own, it’s utterly magic,” Hay said. Three months after receiving the injections Jasper was able to walk on all four legs with the support of a harness and by six months after he no longer needed the harness and only would stumble occasionally. Not all the dogs reached Jasper’s success, as some still needed the harness to support them, but none of the dogs had any adverse health effects.

“Our findings are extremely exciting because they show for the first time that transplanting these types of cell into a severely damaged spinal cord can bring about significant improvement,” said Professor Robin Franklin, co-author of the study. He believes that this procedure one day can be used on humans, though most likely it will need to be used as part of a combination of treatments in order to regain all lost function. “This is not a cure for spinal cord injury in humans – that could still be a long way off. But this is the most encouraging advance for some years and is a significant step on the road towards it” said Professor Geoffrey Raisman.