The job of a bomb sniffing dog is extremely dangerous, but to them it’s all just a game about tennis balls.   Wilber, a border collie whose job as army explosive detection dog in Afghanistan puts him in harms way on a daily basis, but he is happy as a clam.   His handler, Lance-Corporal Nathan Cooper with the Australian Army, says the selection criteria for a bomb-dog is based around their retrieval drive.

“They think it’s a game, they’re looking for a ball, and once they smell that explosive they’ll respond to that, they’ll sit and the ball will come from somewhere. Out of nowhere, they think the whole world is full of tennis balls potentially,” Corporal Cooper says.  Walking about 10-30 meters ahead of their handlers, they form part of a team with army engineers to lay out a safe path for troops to follow. 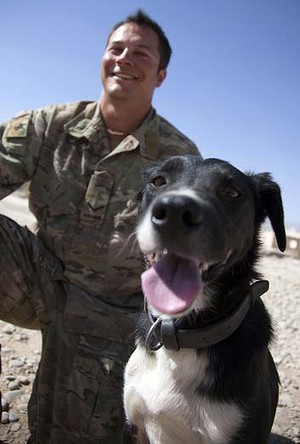 Most of these dogs are rescued from shelters or are donated to the army.  They go through a 6 month training program where they learn to sniff out base compositions of explosives, propellents, ammunition and anything else the troops need found.  Once deployed they are also trained to find specific devices used by insurgents that are not commonly found elsewhere.  In addition, they have to get used to a whole new set of smells in a new country.  Since they need regular exercise and can’t simply go for a run with their handlers whenever they want to, they get exercise time on a treadmill on base to keep them fit. 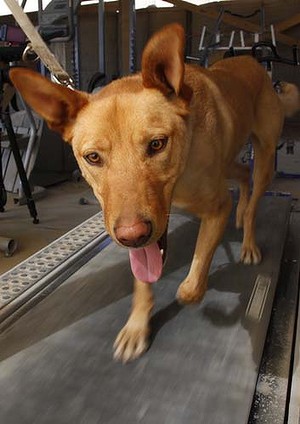 The bomb sniffers are particularly valuable in Afghanistan where insurgents like to build IED’s with little or no metal that cannot be found with regular metal detectors.  It’s a dangerous job.  Five dogs and one handler from Australia have lost their lives in Afghanistan.   A memorial to one dog, Herbie, who was killed with his handler Sapper Darren James Smith at the Tarin Kowt military base reads: “Side by side through dust & snow.”

Bomb dogs usually serve until they are about 7 or 8 years old, or until they lose interest in playing fetch.  After that they are given a much deserved life of leisure as family pets, but their contributions will never be forgotten.