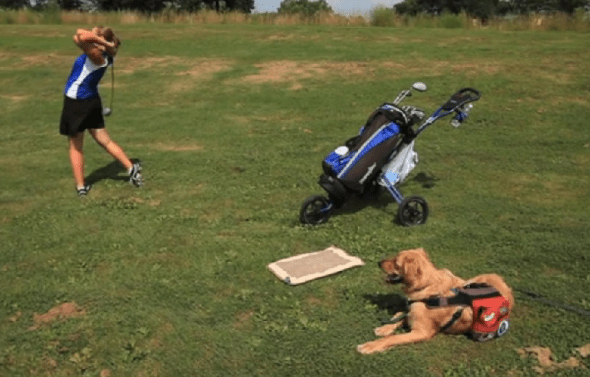 Megan was 4-years-old when she was diagnosed with type-1 diabetes. Even at such a young age Megan learned quickly how to live with her condition.

At the age of 13 Megan took up golf and has excelled at the sport, qualifying for regional tournaments as a high school golfer. Athletic activity can cause blood sugar levels to drop suddenly so Megan had to check her levels every couple holes.

Megan’s hypoglycemia unawareness makes it difficult to spot symptoms. At a tournament last year Megan’s dad Dan asked her to check her levels, when she did her blood sugar level had dipped to 40, well below normal.

“That was one of the times I realized we might need some help,” said Dan.

So the Shirley family looked into training a diabetic alert dog for Megan. The first puppy they got, a chocolate Lab, didn’t work out because he was too playful. So the Shirley’s kept Hershey as a pet. Last summer Liz Norris, owner of the service dog training program Pawsibilities Unleashed, found Sport in a litter of golden retriever puppies that were in need of homes.

“He was outgoing and had a good temperament,” said Norris. “He had good scent work, a high desire to serve, and he loved being with people…He had all the ingredients we look for.”

Sport began training with Norris and was quickly able to detect changes in Megan’s blood sugar level. The Shirley’s were impressed with Sport’s ability.

“To be honest, I didn’t think (Sport) could do it,” said Dan. “I didn’t think any dog could…But not only did he learn how to sense it and alert Megan, but he does it 15 or 20 minutes ahead of when there could be a problem.”

Sport is only a year old and is still learning, but he has already made a big impact in Megan’s life. He has already several times detected Megan’s blood sugar level dropping while she slept and awakened her. Without Sport she would’ve continued to sleep and her low blood sugar could’ve led to seizures or loss of consciousness.

Now when Megan is on the golf course Sport is close by. Dan follows behind her with Sport on a leash. The goal is to eventually have Megan be able to handle Sport on her own. Sport is very focused on his job while on the course and doesn’t disturb Megan or the other golfers as they play.

“Honestly, he has better etiquette than most golfers,” said manager of the golf course where Megan plays, Gary Demling.

Sport has been cleared to be on the course with Megan in the Kentucky PGA Junior Tour and Kentucky High School Athletic Association events. The United States Golf Association has determined that Sport is legal as an “outside agent”, just as a coach or parent is. As far as the USGA knows Sport is the first diabetic alert dog to be trained to walk golf courses.