The world was on pins and needles waiting the arrival of the Royal baby and when emergency personnel where called this past weekend to Duchess Kate Middleton’s family home, Bucklebury Manor, many thought the heir or heiress was on its way. However, the one needing medical assistance was allegedly a different Royal personality, the four-legged one. (FYI the Royal baby is a boy!) 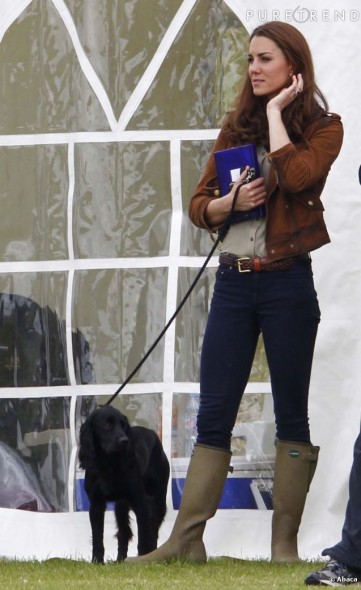 According to a report in the Daily Mail, five firefighters and an animal rescue unit were called on July 19, 2013, to Bucklebury Manor after a frantic call was made to the Royal Berkshire Fire and Rescue Services. The call reported a dog stuck in a gate and immediately the flock of paparazzi assumed the canine in danger was none other than Duchess Katherine’s black Cocker Spaniel Lupo.

Firefighters did not confirm that the animal in need was Lupo, but photographer Greg Blatchford told the Daily Mail “he heard someone shouting a name which sounded like Lupo.”

“I heard a high-pitched scream which sounded like a dog in distress,” said Blatchford. “I presume that was when they were pulling the poor animal out from between the bars of the gate.”

Firefighters responded to the call but did not enter the property. When they arrived they were no longer needed. It appears the dog was able to free itself from the gate.

“Our crew got to the manor but were told as they arrived at the gates that the dog, which had its head stuck, had been freed just a few moments earlier so their services were not needed,” a spokesman said.

The claim made by paparazzi that Lupo was the canine in distress was dismissed when the palace officially announced the dog in need was not Lupo.