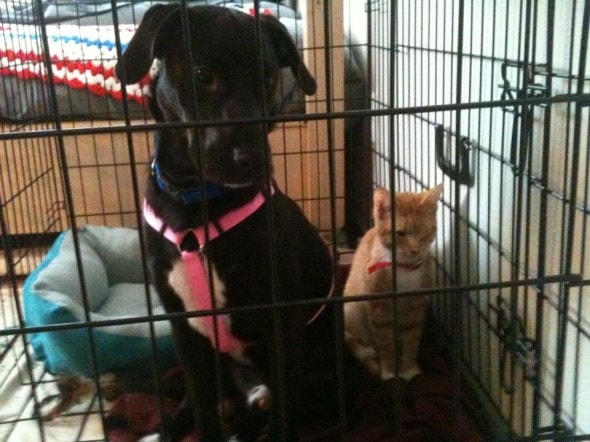 A man in Binghamton, New York was driving last Thursday night when he spotted a dog and kitten on the side of the road on the verge of freezing to death. The two were curled up together trying desperately to keep each other warm.

The man pulled over to rescue the freezing animals. Both had icicles coming out of their noses and couldn’t walk at first. If they had spent 10 to 15 more minutes in the cold they would likely not have survived. They were brought home where they remained inseparable, clearly sharing a close bond.

The family tried to locate a possible owner for the male dog and male cat, who are now being called War Horse and Melvin, but with no leads are now looking to place the two best friends in a good home. When the two first came home they didn’t eat much or drink. Finally on Friday night the two both ate a full meal and were showing signs of improvement.

The family has located a potential home and will be conducting a home inspection to make sure it is a good fit before allowing the two to be officially adopted. For more information on these two friends and to follow their progress go to their Facebook page.