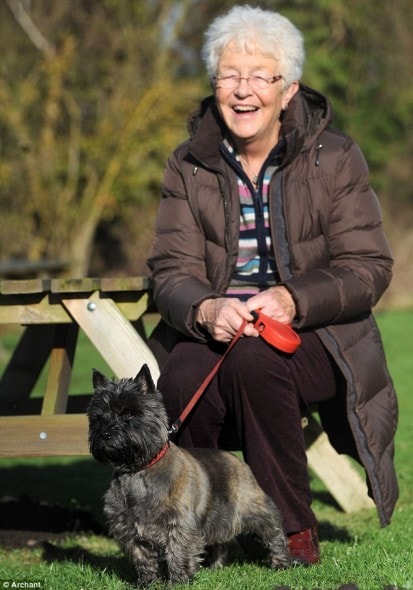 For eight days Margaret Charles feared the worst for her three-year-old Cairn Terrier Maisie. While out on a walk Charles fell and Maisie ran off.  Temperatures dropped dangerously low as Maisie was lost out in the cold and Charles couldn’t imagine how her dog would be able to survive.

On January 16th Charles was walking Maisie near her home in Dunwich Heath near Suffolk, England when she slipped on black ice. “Maisie is always walked on a retractable lead because I’m scared she’ll run off and not come back,” said Charles. “But I let go of the lead when I fell and she ran off immediately.” With the sun setting a bruised Charles went to get help. “A chap came out with me but it was dark and we couldn’t see very well so we had to stop,” she said.

The next morning groups of people joined in on the search for Maisie. Meanwhile the weather continued to get colder. “The weather didn’t get any better,” said Charles. “In fact it got worse, but everyone just kept hoping for the best.” Charles called vets and shelters hoping Maisie might have turned up there, but no one had seen Maisie. As Maisie spent more time lost in the cold weather Charles began to wonder how Maisie could possibly survive.

When Charles got the news she was very emotional. “I was trembling and crying and didn’t know what to do with myself but managed to get into my car and drive to where Maisie was.” Maisie’s leash had become caught on a tree and Maisie had been unable to walk far from it. Maisie was very cold but remarkably okay and given a clean bill of health by the veterinarian. “She had covered herself with snow to insulate herself, which was very clever,” said Charles. Maisie returned to a warm home and lots of treats after her eight day ordeal. Everyone, especially Charles, is thankful that Maisie was found safe.