In a touching display of love, one pet owner gave his dying dog the meal that doggy dreams are made of.   Niko Grosdanis had to have his beloved boxer Lennox put down on January 23rd after a long illness, but he made sure that Lennox’s last hours were extremely happy.  For his last meal Lennox had a gastronomic delight that included a large turkey leg wrapped in bacon, sausages, cheesy bread, rice and salad.

Lennox was suffering from cancer and debilitating arthritis that made even made standing up an ordeal near the end.  He had gone through several surgeries but the most recent tumour was too much and Grosdanis knew it was time to let Lennox go.  But the dog who he described as the “boss” had to have a proper send off, and so he got to devour a plate of food that most dogs only dream about.

Grosdanis said he had planned to have a “puppy party” with all of Lennox’s friends, but things progressed so quickly that there wasn’t time, so instead he opted for the meal fit for a king.   His roommate made a video of the feast and posted it on Reddit, saying, “This post isn’t meant to be sad in any way. He lived like an absolute boss all his life! And the meal reflects that!” 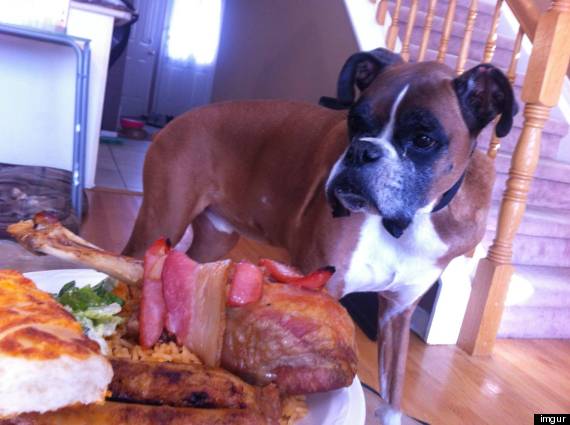 The video has gone viral and people everywhere were both touched and entertained by the sight of the food being devoured in under 2.5 minutes.   “I knew a lot of people would love it because he’s so cute and you can’t not love that but I didn’t think it was going to get so many views,” Mr Grosdanis said.  He did everything he could for his beloved pet, including letting him die with dignity despite how difficult it was to say goodbye.