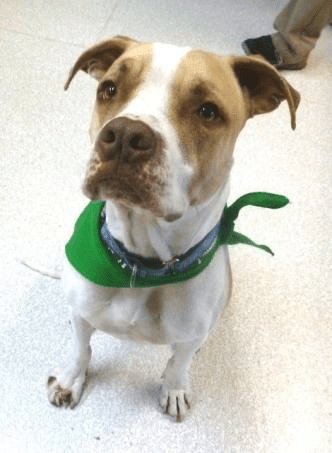 Covered in dirt with a mangled front paw, it is unknown how much time Gandalf spent wandering in the woods before being found. Upon inspection, the 1st Avenue shelter staff noticed immediately that Gandalf had horrible open wounds under his elbow and covering his face and neck. His anxiety level was palpable, completely out of character for his boxer / mastiff mixed breed.

As a stray, all possible measures were undertaken to find Gandalf’s family. But months went by and no owner came. Then one day the shelter received a call…The story the caller told was that after being involved in a dog fight, Gandalf had been thought to be dead. The owner (not the caller) had “buried” him in the woods!

Very much alive, Gandalf remained at the shelter where he quickly became a favorite of staff and volunteers. With such striking features and a howl that conveyed all the sorrows and joys such a wanderer had witnessed, every day that passed without an interested adopter amazed and saddened the staff. How could someone not want to take this handsome miracle home? An army of volunteers provided hours of adoration and play dates on the 5-year-old but nobody could be found to give him that one, most important, gift — a home.

Over-stimulated in the kennel, Gandalf earned his place as “office dog” and came to be one of the regulars spending his days in the bustling front room. Even with the increased visibility weeks passed without a second glance. In the meantime, as part of a new shelter pilot program, Gandalf began attending Well Mannered Dog basic obedience classes with staff and select volunteers. 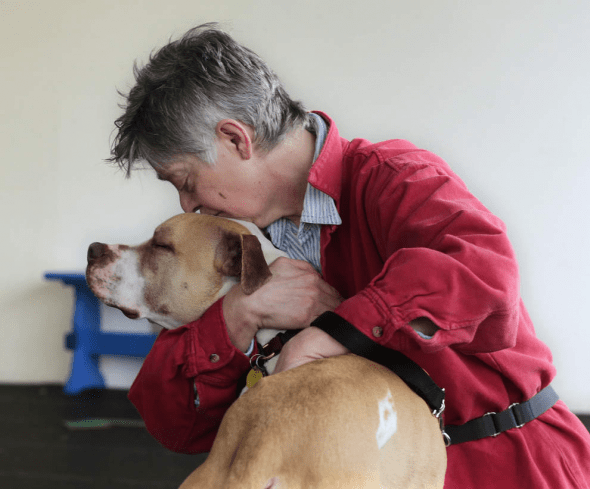 The class, designed specifically with shelter dogs in mind, was simultaneous enrichment, stress relief and fun while reinforcing positive behaviors and releasing energy along the way.  A chance to get out of the shelter, the field trips were a highlight not just for the dogs but the volunteers who appreciated the free chance to interact and learn more about ways they can positively influence adoptable behaviors in the shelter dogs they interact with.

Once a week Gandalf attended class, then lessons learned were reinforced with one-on-one sessions back at the shelter. The training time worked to decrease his stress level and helped the hesitant boy build confidence. By week 8, it was apparent Gandalf deserved his title of ‘graduate.’

Soon after finishing the course, and approaching his 120th day at 1st Avenue, a kind lady noticed Gandalf from the lobby. After spending some time and being introduced to his signature throaty howl, Gandalf was put “on hold” overnight. Staff held their breath to see if she would return the next day. She did.

There wasn’t a dry eye in the office the day Gandalf proudly strutted out the front door for the last time. Gandalf’s days of wandering lost and alone are over.

Gandalf’s mom lovingly describes the addition to the family: 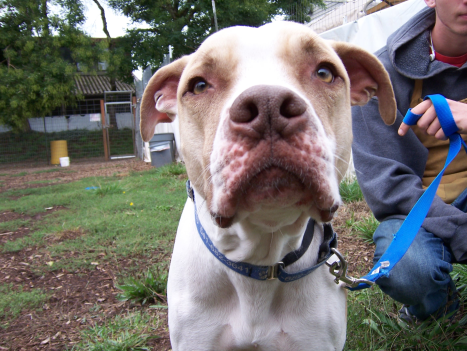 “He is great! Such a lot of fun and a real cuddle bug. We walk 2+ miles almost every day. He loves the back yard and believes that one day, just maybe, he will actually catch a squirrel. He is very social, loves visitors to the house. I am not sure, but I could swear that he actually sings when I come home after work.”

The Greenhill Humane Society, SPCA is a private, 501(c)3 rescue organization located in Oregon’s Willamette Valley and is a place to heal and nurture homeless, neglected and abused animals. They operate two shelters in Eugene, Oregon: The First Avenue Shelter, which cares for stray and abandoned animals, reunites lost pets with their families and provides adoption services for pets who need new families; and the Greenhill Humane Society shelter, which cares for owner surrendered pets and animals transferred in from over-crowded shelters along the west coast.

In both shelters, animals are lovingly provided safe shelter, high quality food, medical care, enrichment activities and lots of TLC. Their mission is to provide safe shelter for animals in transition, serve as advocates for animals and their people, work to end pet overpopulation and educate the public about compassion and responsibility towards all animals.