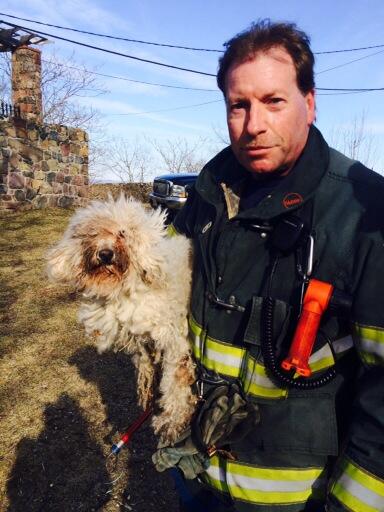 Firefighters in New Jersey repelled down a 50 foot cliff to rescue an abandoned malnourished poodle.

Paterson Animal Control believes the poodle was abandoned in Garret Mountain State Park. The poodle wandered into a deep crevice where firefighters found it on Monday afternoon.

The Paterson Fire Department received a call about a yelping pup. When they responded to the scene they tried to coax the poodle out of the crevice.

“We tried to coax him out with food,” said Paterson Fire Department Battalion Chief Brian McDermott. “We tried to use dog snares.”

Unfortunately these methods were unsuccessful. Working with New Jersey Search and Rescue a team of men rappelled fifty feet down the cliff and rescued the poodle from the ravine.

The dog was malnourished and dirty but luckily had no serious injuries. The dog is now is in good care and once he is checked over by a veterinarian he will be put up for adoption.