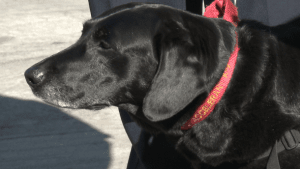 Hollie celebrated her retirement with cake and special dog biscuits. The 8-year-old black Lab retired from her career as an arson investigator with the San Diego Fire-Rescue Department on Monday.

Hollie’s is the third dog to work for the Sand Diego Fire-Rescue Department as an arson investigator. When firefighters suspect the use of an accelerate in a fire, Hollie steps in to help. “With their acute sense of smell, if there is any residue left they are going to find it,” Fire Captain Michael Merriken said. “They are going to help us [so] we can collect that evidence. That just totally strengthens our case of arson against the suspect.” Merriken has been Hollie’s handler and he is retiring alongside his partner.

Hollie’s efforts over the last six years have helped catch several criminals. Hollie has also become the unofficial spokesdog of the Sand Diego Fire-Rescue Department, helping to reach out to the community and let them know about all the programs the department has to help them.

The fire department is going to miss having Hollie around. Her colleagues presented her with a grain-flavored cake on Monday to celebrate her hard work over the past six years. When she arrived at her ceremony she was applauded by her colleagues.

Hollie will be going home with her fellow retiree Merriken. The two have plans to spend a lot of time at the beach relaxing after their years of service to the community.  Merriken said, “We’re just going to be doing a lot of playing ball and hanging out.”