Lazarus, a four-year-old black shepherd mix from Ozark, Ala., shouldn’t be alive today, but he is. He first survived getting run over by a car, later he was scheduled for euthanasia and then too survived the lethal shot. 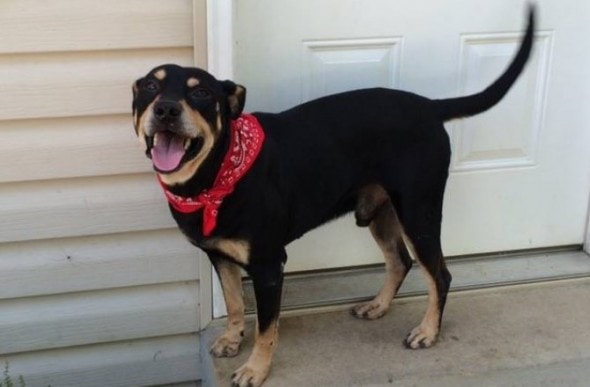 The pup arrived at the Ozark shelter when his owner surrendered him. The dog had already had his first encountered with death after getting hit by a car and left injured. At the shelter, he was given a week to get adopted and when that failed, he was put on the euthanasia list. When his time was up, a veterinarian gave him not one but two lethal doses because the first one didn’t work, but the next day shelter workers arrived and found the dog alive.

News of him surviving two euthanasia injections went viral on Facebook, still the dog was set for euthanasia again the following day. Animal advocate Nassrin Dashti-Hubbard read the story and in an effort to help rescue the dog, she contacted the animal organization for which she volunteers, Two By Two Rescue. Within an hour Sonya King from Two By Two Rescue was working to bring the black dog into their program.

Transportation was arranged. Lazarus left the Ozark shelter and moved into Two By Two Rescue in Helena, Ala.

“When the staff arrived in the morning, [Lazarus was] scared and wobbly, he was sitting in his cage alive!” King wrote on the rescue’s Facebook page. “[He] is no longer stumbling and losing his balance. He has a great appetite and is so appreciative to be loved. Lazarus’ health is perfectly restored and there are no lasting effects. Lazarus was raised from the dead! True Story.”

The death-cheating pooch is currently living in a foster-to-adopt home. He is undergoing treatment for heartworm and is in a temporary cast to allow his car accident injuries to heal.

King expects Lazarus to be ready for adoption in January 2015, for now, he is enjoying and living life to the fullest.