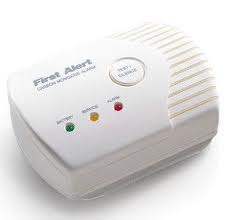 A Gainesville family is crediting their dog with saving their lives.   The family of four was mystified by the odd behaviour of their 12 year old pit bull in late November.  For a week or so, Spanky was acting hysterical and frightened whenever he entered the home he had lived in for years, owned by Ray Barlow Jr.  Finally a dog behaviour expert was called in to solve the mystery.

Thomas Purcell, who is also a retired police officer, came to meet Spanky and find out what was going on that was scaring him.  “[Spanky] was OK on the porch, but when we got inside the house, he started whining, panting and showing extreme anxiety,” Purcell said. “Meanwhile, the people living in the house were telling me they were having headaches and other symptoms for a week.”

On December 4th, National Fuel was called to the house and a carbon monoxide leak was discovered, which explains both the family’s symptoms and the abnormal reaction of Spanky to entering the home.  Barlow lives in the home with his girlfriend Chena Carlin, and his 11-year-old daughter stays there on weekends.   They also live with another friend, Craig Poler.

They are lucky to be alive according to Purcell, “In my mind, they all could have died in their sleep if not for that dog.  It’s the most amazing thing I’ve ever seen.”  The family is grateful to Spanky for alerting them to trouble, and will take careful note of his warnings in the future, but every home should be equipped with a carbon monoxide detector just in case.