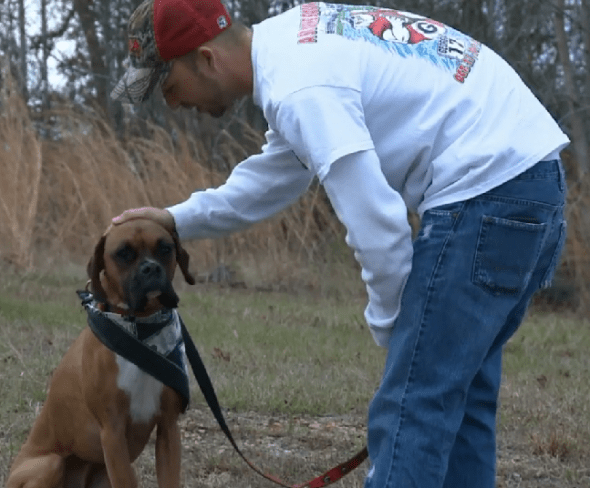 All Sergeant Kevin Maine wanted for Christmas was his 2-year-old boxer. Thanks to Kindred Hearts animal transport his Christmas wish came true.

Sergeant Maine got his dog Rowdy when he was on leave from his second deployment. “I came home from my leave and got the dog and had to go back overseas to Iraq. I came home, and he was just my best friend, best dog ever.”  When Maine got divorced from his wife she kept Rowdy and moved to Colorado.

When Maine’s ex-wife asked him to take Rowdy back, Maine didn’t have the leave time or the budget to travel and get him. Maine’s mom, Kathy Smith, was determined to retrieve Rowdy for her son. “So many Christmases I’ve had to send packages to Iraq, and it’s important to me to just have my son home,” Smith said. With her home for Christmas she was determined to be able to give him his only Christmas wish in person. She checked into possibly driving to get Rowdy or flying him, but none of those options were plausible for the family.

Smith turned to social media for help. “The response was so overwhelming because the request was to get a soldier his dog back for Christmas,” said Smith. “That’s all he wanted, and they made it happen.” Through her outreach she was connected with Kindred Hearts animal transport.

Kindred Hearts is a network of volunteers who shuttle dogs around the country. Twenty two volunteers worked together to reunite Maine and Rowdy. Maine now has many happy days to look forward to, “It’s going to be nice to come home every day to meet him at the door with his tail wagging.”