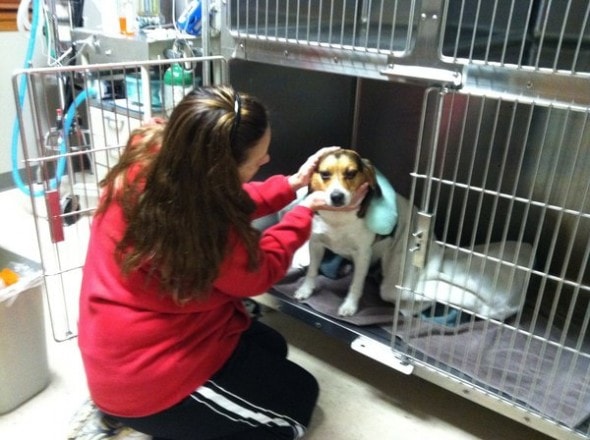 For some it may feel like winter has been around forever, but in reality the season is still young, particularly when it comes to lakes and rivers freezing over.  One Kansas dog found that out the hard way, after falling through thin ice into their wastewater lagoon and almost dying on Boxing Day.

Fortunately the dog,a 7 year old beagle named Bear, was rescued by Sedgwick County Fire crews before he succumbed to hypothermia.  The dogs were out playing and when only 2 came in to eat dinner their owner, Patricia Wilson, became alarmed.  She found him quickly but fell into the water herself trying to get him out,  so she called for emergency help.  “Oh, I panicked! I didn’t know… I panicked,” said Wilson.

The help came quickly but it ended up taking two Sedgwick County Fire crews, one with special cold weather wet suits, to pull Bear out of the water to safety.  He’d spent nearly an hour in the icy wastewater lagoon and was lucky to be alive.   “I don’t know how he managed to hang on as long as he did, because once I hit the water I was completely paralyzed,” said Wilson.

A very grateful Wilson will be keeping a tighter rein on her pets in this cold weather, and all dog owners living or recreating near water should be extra cautious of the extreme hazard of thin ice.  Bear recovered at the vet and thankfully he will be fine and a holiday tragedy has been averted.